Before The Decision 2.0, Coach K Told LeBron, 'You Don't Owe Anybody, You Owe Yourself' | Zagsblog
Follow @adamzagoria

Before The Decision 2.0, Coach K Told LeBron, ‘You Don’t Owe Anybody, You Owe Yourself’ 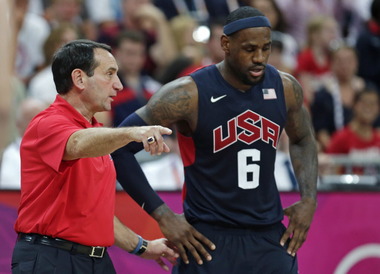 By JOSH NEWMAN Special to ZAGSBLOG At the LeBron James Skills Academy last week in Las Vegas, the newly re-minted Cleveland Cavalier was under a self-imposed public gag order. James was determined not to create the mess that his 2010 free agency turned into, but that doesn’t mean he wasn’t willing to discuss the topic last week with someone he greatly respects. “I wished him luck, he looked like he was in control of the situation,” Duke and Team USA head coach Mike Krzyzewski said on a conference call Monday morning after USA Basketball announced its 19-player FIBA World Cup training camp roster. “I just told him, ‘Do what you feel you need to do. You don’t owe anybody, you owe yourself.’ He didn’t need any advice from me.” James announced on Friday via a first-person essay on SI.com that he would be coming back to the Cleveland Cavaliers after four trips to the NBA Finals and two championships with the Miami Heat. On Saturday, he inked a two-year deal with $42,2 million. Northeast Ohio’s prodigal son returning has made the Cavaliers among the favorites in what is shaping up as a wide-open Eastern Conference. James will be joined by Kyrie Irving, who signed his own max contract worth $90 million over five years, and No. 1 overall pick Andrew Wiggins, who new Cavs head coach David Blatt says will not be traded. “I hope that the main thing is he serves as an example of what a star player, what a great player does in order to develop his greatness and keep it going,” Krzyzewski said. “For Kyrie to be around that on a day-to-day basis, really all the teammates, but especially Kyrie because he can be that level of player. He’s very fortunate to have that.” James has played in four international competitions under Krzyzewski, including winning gold at the 2008 and 2012 Olympics, but this summer’s FIBA World Cup will not make five. James and other stars such as Carmelo Anthony, Deron Williams and Chris Paul are on the 2014-16 National Team roster, but are there with an eye on the 2016 Rio Olympics. Irving will be a part of the 19-player training camp, which convenes in Las Vegas from July 28-August 1. Kevin Durant and Kevin Love are the headliners, while DeMar DeRozan, Chandler Parsons, Bradley Beal, DeMarcus Cousins, Stephen Curry, Anthony Davis, Andre Drummond, Kenneth Faried, Paul George, Blake Griffin, James Harden, Gordon Hayward, Kyle Korver, Damian Lillard, Derrick Rose and Klay Thompson will join them. Notable absences from the roster include Washington Wizards point guard John Wall, Portland Trail Blazers big man LaMarcus Aldridge and NBA Finals MVP Kawhi Leonard of the San Antonio Spurs. National Team managing director Jerry Colangelo indicated that Leonard’s absence was due to the need for rest after a long playoff run, while bluntly stating Aldridge simply wouldn’t be available. “We can only offer an opportunity and then they can either accept or not,” Colangelo said. After training camp breaks following a public intrasquad scrimmage on Aug. 1, Team USA will play four exhibition games, two of which will be at Madison Square Garden on Aug. 20 and 22 against the Dominican Republic and Puerto Rico, respectively. The United States will open FIBA World Cup-play in Group C on Aug. 30 against Finland. Photo: Associated Press Follow Josh Newman on Twitter