Andrew Wiggins will get a chance to play with 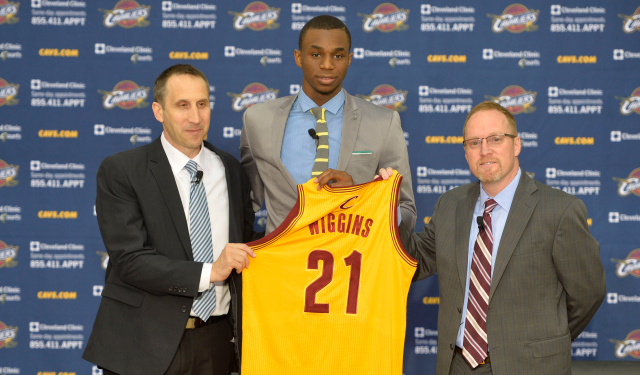 LeBron James and won’t be traded to the Minnesota Timberwolves for Kevin Love. So says new head coach David Blatt. “There’s no reason or cause for worry on his part because Andrew’s not going anywhere, as far as I know and as far as the club has expressed,” Blatt told reporters Saturday following the Cavaliers’ Summer League practice in Las Vegas, according to ESPN. The 6-foot-8 Wiggins was the No. 1 pick in last month’s NBA Draft and said before the Draft he would love to play with James. This weekend that became a reality. “I would think for a guy like Andrew, to have the opportunity to play with arguably one of the best players of all time, and to learn from him and to be tutored by him and to play alongside him — which he will — I gotta think that’s a tremendous boost to his confidence and his comfort level and probably his motivation,” Blatt told reporters. After scoring 18 points against No. 2 pick Jabari Parker and the Milwaukee Bucks in his summer league debut, Wiggins sounded excited about the prospect of playing with King James. “It’s going to be a great learning experience for all of us on the team. We get to go under his belt and see how hard he works and what it takes to get to his level,” Wiggins said. The Cavs now have four former No. 1 draft picks — all chosen by them — on their roster in James, Wiggins, Kyrie Irving and Anthony Bennett. **For previous articles on Andrew Wiggins, click here. Follow Josh Newman on Twitter