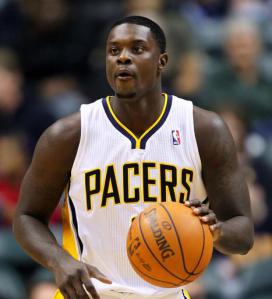 Lance Stephenson turned down a five-year, $44 million offer from the Indiana Pacers, and the Charlotte Hornets, Chicago Bulls and Los Angeles Lakers are all interested, according to a report from ESPN’s Chris Broussard. “It’s gonna be interesting,” a league source told SNY.tv. “I felt all along that someone’s gonna come in and make a bigger offer. I thought Charlotte could come with $12 million a year because [Michael] Jordan’s got a taste of winning and he said he wanted to upgrade the two guard position over [Gerald] Henderson and so I thought that was a viable option. “I thought Chicago, I know [Coach Tom] Thibodeau likes Stephenson and after they go through the biggest names guys, obviously Carmelo [Anthony] first. If that doesn’t work they’ll look at somthing else. I heard they’re looking at [Luol] Deng again, too. “The Lakers are always a wild card because their roster is bereft of talent. They got  an aging Kobe Bryant who has two years and they need to build for the future.” Stephenson’s agent, Alberto Ebanks, told SNY.tv in May that there would be “no shortage of suitors” for Stephenson, who  averaged 13.8 points, 7.2 rebounds and 4.6 assists for the Pacers and led the league in triple-doubles. “At 23 years old, with Lance’s credentials, Lance is one of the best young players in the NBA, that’s a fact,” the source said. “His resume is fantastic and he’s in the gym every single day.” The source said that after Anthony and LeBron James, Stephenson is one of the premier free agents on the market. “When reality dawns, there’s only one Carmelo, only one LeBron and they can only go to one team and there’s 30 teams so do the math,” the source said. “Those guys are on the elite tier and then you move down to the star players and that’s where Lance is. He’s one of the premier guys and he’s only 23 years old. If he behaves himself and keeps improving, five years from now he’s going boe signing a mega contract.” Stephenson and his agent have both expressed a desire to remain in Indiana — where Larry Bird has groomed and looked out for Stephenson —  so it will be interesting to see if they counter with a stronger offer. Follow Adam Zagoria on Twitter And like ZAGS on Facebook