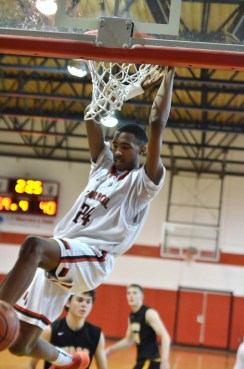 By NICK MEDLINE Special to ZAGSBLOG On Monday, Derrick Jones visited UConn and officially received a scholarship offer from the reigning NCAA champions — which would be enough to satisfy most elite prospects. But instead, the 6-foot-7 Jones out of Radnor (PA) Archbishop Carroll followed his visit by traveling from Storrs, Conn., to New York City and poured in 30 points in a Dyckman Park summer game  —  just another example of how much Jones loves basketball. Just last month, Jones poured in 31 points in the Mary Kline Classic in New Jersey. “Derrick lives on the basketball court,” his father, Derrick Jones Sr. told SNY.tv. “Coming from Pennsylvania to play on that court is a real privilege for a kid that’s trying to come up in the world and do his thing.” That followed a great experience at UConn, Jones Sr. said. Coach Kevin Ollie focused on his idea of there being “no one real position” on the floor, with Jones a flexible option in his fast-paced offense. Ollie — who earlier Monday received a verbal pledge from 2015 point guard Jalen Adams —  had said he wanted to meet Jones face-to-face before formally extending an offer. “The offer helps solidify the type of potential Derrick possesses,” WE R 1 coach Terrell Myers told SNY.tv. “To be offered by the National Champions and see the effort they put into his visit truly make us excited about making the trip.” Derrick Jones Sr. is excited that UConn is recruiting multi-dimensional players. “Derrick would play really all over,” Jones Sr. said. “[Ollie] is trying to get himself agile players that can be put in places to be successful. The two, the three, the four, you never know. The options are great.” Jones Sr. praised Ollie for his passionate approach to the team and to recruiting. UConn offered many selling points to Jones, including an emphasis on facilities, personnel, and a “straight to the point” attitude. “He’s not all about one player,” Jones Sr. said. “It’s about UConn. He made us feel really at home. We’re still going to weigh our options but it’s definitely a school we’re looking at.” Now the Rivals.com No. 33 prospect in 2015, Jones picked up significant high-major interest. Jones plans to visit Kentucky, Louisville and Syracuse after the July evaluation period. He holds other offers including Indiana, Maryland and Villanova. Jones has no timetable to cut his list of schools, though that could happen near the end of July. His dad said he still gives each school an “equal opportunity.” “Everyone offers a great program, academically and on the court,” he said. “It’s hard decision, but it’s going to boil down to where our heart is.” Follow Nick on Twitter Follow Adam Zagoria on Twitter And like ZAGS on Facebook