Jabari Parker Expects to Go No. 2 to Bucks 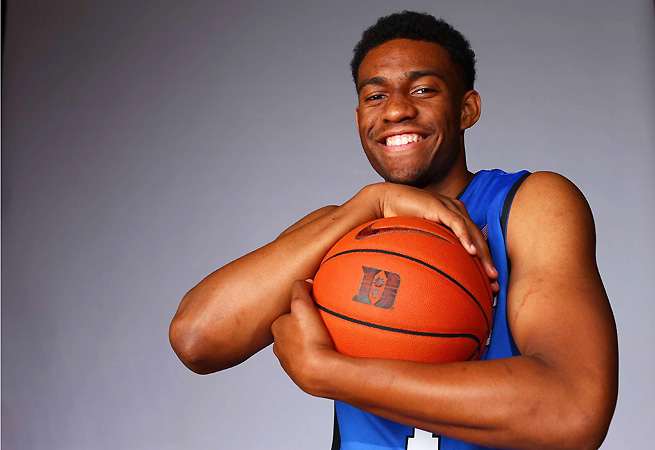 NEW YORK — Reiterating comments he made to ESPN’s Andy Katz, Duke freshman Jabari Parker says he expects to be selected by the Milwaukee Bucks at No. 2 in Thursday’s NBA Draft. That would reinforce the widespread belief that Canadian guard Andrew Wiggins of Kansas will go No. 1 overall to the Cleveland Cavaliers. “I got that answer, I got that fair assessment and they sat with me and said, ‘We’re going to go with you,'” Parker said of the Bucks. “I didn’t get that with the Cavs.” “I have some comfort level with them, especially with them just telling me briefly, ‘We want you,” he added. “I didn’t get any really answers from the Cavs so I’m just going with what I’m certain with.” Parker has been compared to Carmelo Anthony by Duke and Team USA coach Mike Krzyzewski. “Jabari’s going to be a great player,” Coach K told ESPN’s Colin Cowherd Tuesday. “Carmelo’s already proven to be a great player. I really think Jabari can put the ball on the floor a little better. He’s like sneaky athletic I think. They’re similar in that Carmelo’s been a franchise scorer. I think Jabari’s going to be a 20-25-point scorer in the NBA.” Parker said he’s fine with going No. 2 if that’s what happens. “One, two, three, four, five, even in the lottery, I think that a lot of the guys would be safe to say that they’re glad to be in this position,” he said. The 6-foot-8 Parker said his workout with Milwaukee went well and he’s comfortable with coach Larry Drew and management. “They’re pretty cool,” he said. “They’re a really good organization. I felt real comfortable working with their staff.” Parker said Milwaukee’s base of “young talent” is “really appealing” to him. “I’ll get a chance to grow with their team,” he said. Parker disputed reports that he “tanked” the Cleveland workout because he didn’t want to play there. “I have too much pride to waste other people’s time,” he said. “I come from Duke and most importantly I come from a family with good values and I don’t have time to just waste other people’s opportunities and the chances that I have in front of me. There’s going to be a lot of speculation and a lot of negativity, but I would be glad to look that person in the eye that wrote that stuff and they can give me their assumptions.” Parker said he wasn’t insulted by the report. “No,” he said, “because I’ve been dealing with that my entire life, people giving me negative [comments] about my weight but at the end of the day I want to play basketball.” Asked how he would feel if the Cavs end up picking him, Parker called that “a great opportunity, too.” “Wherever I’m going I’m going to go on that stage and accept that hat,” he said. Parker said he believes playing in summer league with help him adjust to the “new rules” and “the defensive  changes.” “Then I’ll be able to prove myself,” he said.

Tyus Battle to Visit UConn as Huskies Are in Mix for Package With Thornton; Ray Smith Has New List (UPDATED); Derrick Jones to Visit UConn