Dante Exum Could Have Played for Kentucky Last Season 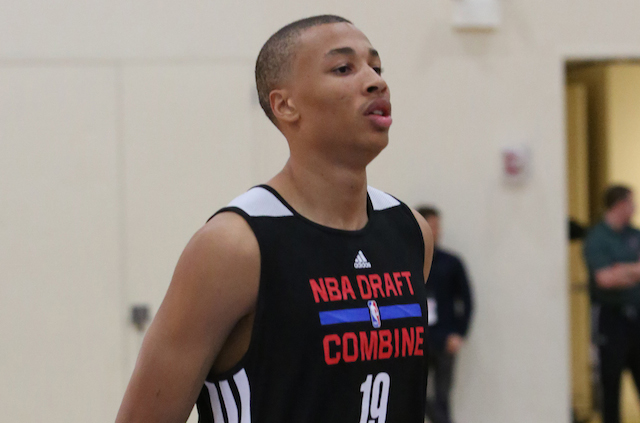 NEW YORK — Dante Exum had an offer to join Kentucky for the second semester last season, as ESPN’s Jeff Goodman reported, so what would have happened had the Australian guard been with the Wildcats for the NCAA Tournament? The 6-foot-6 guard would have played in the backcourt with Andrew and Aaron Harrison and perhaps been the difference-maker when Kentucky lost to UConn in the NCAA title game. “It changes everything,” Exum said Wednesday at NBA Draft media availability of the hypothetical. “It’s a butterfly effect so you never know what could happen.” Projected as the No. 4 pick by DraftExpress.com, Exum said he spoke last year with Kentucky coach John Calipari about the option of joining them midway through last season after he finished school at the Australian Institute of Sport. “Yeah, yeah, I talked to Coach Cal and he brought up the idea,” Exum said. “And the way I looked at it was I wasn’t going to go onto a team that had already been established and had gone through [the] offseason …and try and come into the team and I guess highlight myself or getting into the mix would have been difficult for me so it’s like an outsider coming in.” Exum was at the Final Four in North Texas and did watch UConn beat Kentucky in the championship game. “I went to the Final Four and Shabazz Napier signed with my agency so I got to talk to him about how it was to play in the Final Four and see it and he said it was one of the best experiences,” Exum said. “I’m unfortunate to not have that experience but I’m looking at the bigger picture and i’m going to be in the NBA.” Exum trimmed his list to five schools — Indiana, Kentucky, North Carolina, Michigan and Oregon — with Indiana considered by many the favorite because it was the only school he visited. He told ESPN he would have attended Indiana had he gone to college, but on Wednesday in New York at least discussed possibly playing for Kentucky. “He would have been at a major disadvantage,” Cecil Exum, Dante’s father and a former player at North Carolina, told Goodman. “Behind the eight-ball. I shot that down and told the other schools that was not an option.” “I spoke with my family and we decided if I was going to do college it was going to be for this upcoming season [2014-15], but we decided to go down this [NBA] path,” Dante said WEdnesday. With Andrew Wiggins and Jabari Parker expected to 1-2 Thursday night, Exum is expected to land either with the Philadelphia 76ers at No. 3 or the Orlando Magic at No. 4. He worked out for both of those teams, as well as the Milwaukee Bucks, who pick at No. 2. Exum reportedly declined a last-minute meeting Thursday with the Cleveland Cavaliers, who pick at No. 1. “I worked out for 2 through 8 pretty much and I felt comfortable with all the workouts and I guess it’s in their hands now,” Exum said. (Nick Metallinos contributed reporting)