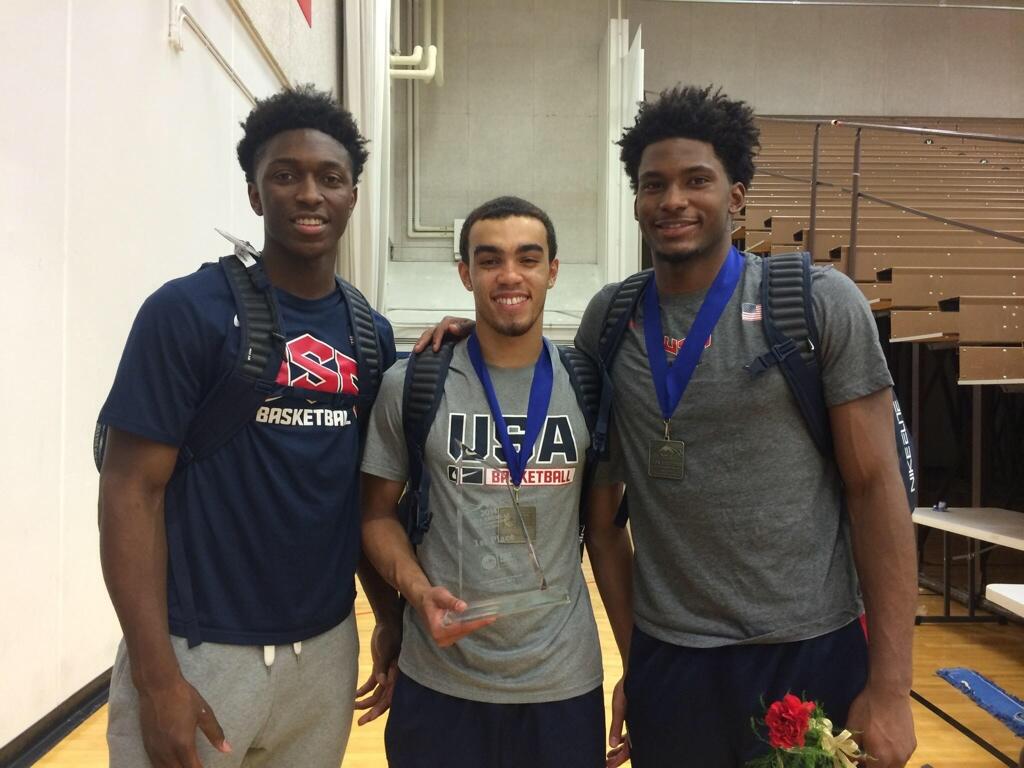 The USA won a gold medal Tuesday night in the FIBA Americans U18 Championship in Colorado Springs, CO, with a 113-79 rout of Canada. Duke freshman Justise Winslow went for 20 points and 10 rebounds, Arizona freshman Stanley Johnson had 19 points en route to MVP honors and uncommitted junior guard Isaiah Briscoe tallied 14 points and five rebounds. For Winslow, Johnson and Duke freshman point guard Tyus Jones, it was their third gold medal for USA basketball. Winslow Tweeted: “Looks like we all got 3 gold medals now.. Congrats brothers! @Tyusjones06 @Chief_Justise @StanMan_5 #TeamUSA” It was also the third gold medal in three years for head coach Billy Donovan. “I’m just honored,” said Donovan, who also led the 2012 USA U18 team and 2013 USA U19 World Championship Team to gold and owns a USA Basketball head coaching record of 19-0. “I think that as a coach in this kind of event, you’re only as good as your players. I’ve been very fortunate that in he past three years, I’ve coached some great guys, great kids and have had some great coaches working with me. These guys were unbelievable to deal with. The bought in, they listened and they’re the ones who really played well. I’m just happy I could be a part of it and be taken along for the ride.” “It’s a team honor, really,” said Johnson, who scored 12 of his 19 points in the first half, on winning MVP honors. “Anybody on the team could have gotten it; what’s more important is winning the gold medal and all of us playing hard to get it. “It’s a great experience; it’s my third time doing it,” added Johnson, who finished averaging a USA-best 14.0 points and 5.4 rebounds a game. “Every team is different, every situation is different and it’s all been really good. Now we’re older and a lot of good coaching and it was tougher. Playing Canada last, it made us challenge ourselves and play better so to win the championship here is amazing.” Jalen Brunson added 12 points and six assists and 2015 Duke commit Luke Kennard had 10 points and four rebounds. For Canada, Dillon Brooks led the way with 27 points, Montaque Gill-Caesar added 22 and Harvard freshman Chris Egi tallied 18 boards and 13 boards.

USA Basketball U17 Trials to Draw Players, Coaches Away from AAU Events; Serves as Incubator for Potential Package Talk