Kyle Anderson to Have Second Workout With Hawks Tuesday (UPDATED) 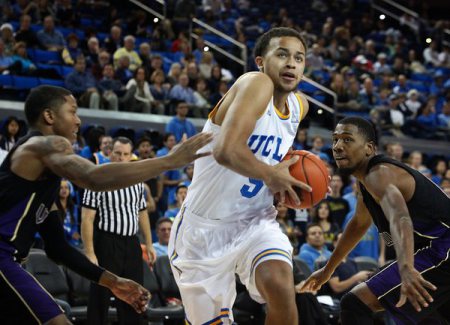 The Atlanta Hawks wanted Kyle Anderson back for a second workout and now it will happen on Tuesday, his father told SNY.tv. It was originally supposed to take place on Monday. The 6-foot-9 New Jersey native and former UCLA star previously worked out for Atlanta last month. The Hawks pick at No. 15 in Thursday’s NBA Draft. The Suns, who pick at No. 14, are also high on Anderson. He worked out for Phoenix June 9 but did not have a second workout. The Chicago Bulls, who pick at 16 and 19 but could trade one or both picks, also like Anderson, who has worked out there as well. Anderson has his last workout Friday with Memphis, who pick at 22. Anderson averaged 14.6 points, 8.8 rebounds and 6.5 assists for the Bruins, and has been compared to Magic Johnson by Hall of Fame St. Anthony coach Bob Hurley. “I’m just trying to show them that I can play,” Anderson told SNY.tv recently. “Nothing too crazy, just show them that I can play. Just playing my game, do what I always do.” Follow Adam Zagoria on Twitter And like ZAGS on Facebook