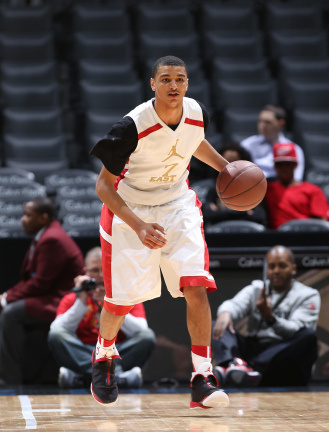 As expected, Canadian point guard Jamal Murray racked up a slew of offers beginning Sunday when college coaches could communicate with rising juniors. Ohio State, N.C. State, Florida State and Virginia all offered the 2016 guard from CIA Bounce and Orangeville (Ontario) Athlete Institute. Illinois and Michigan State had previously offered. Texas and Michigan also called to express interest, but did not offer. The 6-foot-5 Murray has taken unofficials to Syracuse, Georgetown, Michigan and N.C. State. The MVP of the 2013 Jordan Brand International Game, Murray has been loosely compared to former Syracuse point guard Tyler Ennis, a projected lottery pick who also played for CIA Bounce. “Our game is comparable,” Murray said at the Mary Kline Classic. “He looks to pass more and I can get my own.” Murray said he “can play all positions but [prefers] the one mostly.” At 6-5, he towers over many opposing point guards. In the meantime, he’s keeping his head down and isn’t worried too much about college He isn’t even on Twitter so he doesn’t follow much of the recruiting scene. “I don’t like to put too much clutter in my brain,” he said. “I don’t need to know about that and also I don’t really like Twitter.” Follow Adam Zagoria on Twitter And like ZAGS on Facebook