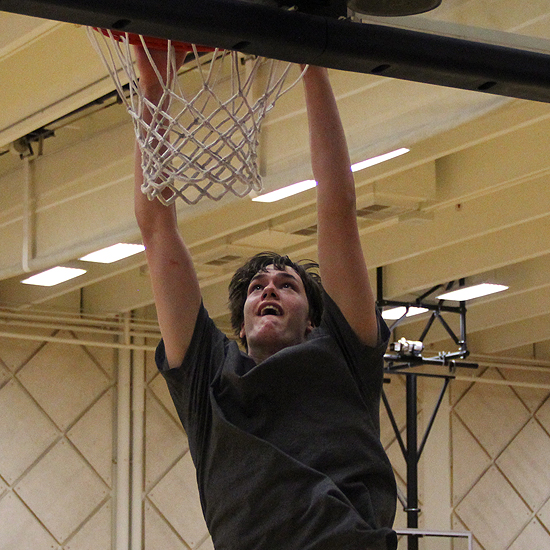 Stephen Zimmerman received more than 30 text messages from college coaches after making the USA U18 team, but he said the funniest came from Louisville assistant Wyking Jones. “Coach Jones from Louisville said if I keep this up then maybe my girlfriend will actually start liking me,'” the 6-foot-11 Zimmerman out of Las Vegas Bishop Gorman said by phone from Colorado Springs, Colo. If Zimmerman can help Team USA win the gold medal at the FIBA Americas U18 Championship, you have to think his girlfriend will be a big fan. “I was really excited to make it this far and it’s a real good opportunity,” he said. “I’m real blessed. Now the only goal is to win a gold medal.” Zimmerman said he was surprised when his high school teammate, 7-footer Chase Jeter, was among the last three players cut on Sunday. “I was really surprised that Chase got cut,” he said. “He did his best. He worked real hard and stuff. The coahes said he just didn’t fit the playing style. I was telling him to keep his head up, that he did his best and just to move forward. And he said just win the goal medal.” Jeter and Zimmerman both remain undecided on schools and are among the most highly sought after bigs in the Class of 2015. While Jeter told SNY.tv four schools are working the hardest and is targeting a decision later this summer, Zimmerman is still mulling eight schools:  Kansas, UNLV, North Carolina, Indiana, Louisville, Kentucky, UCLA and Arizona. Here’s his take on his schools: North Carolina: “I like the program. They have a successful program. Coach Roy Williams, he’s old school. North Carolina has a great name and a great history.” Louisville: “I like that they have a history of being competitive and I like the coaches. The individual skill workouts that Coach [Rick] Pitino has with each player and his reputation speak for themselves.” Arizona: “Coach [Sean] Miller’s here helping coach…It helps me see what kind of coach he is and how he can adapt from coaching his team and then switching over to coaching a bunch of different players, so it’s eye-opening.” Kentucky: “[John Calipari] texted me and told me congratulations for making the team and stuff. They have the big picture in mind. I like Coach Cal, I like how they just seem so professional.” Kansas: “They talked to me lately, saying congratulations and stuff. They have a great history with big men. And they have a great school name and a great legacy. Indiana: “Indiana as well is great with big men. A couple years ago they put in a bunch of NBA players, and that’s the goal for me.” UCLA: “I like [Steve] Alford, I like his coahcing style and stuff. They seem like they fit me. I’ve been out there a couple times and I like the campus and it seems like a great school.” UNLV: “They’re a hometown school. I’ve been to a lot of games so I get to see how they run and it seems like a pretty good system.” Photo: USA Basketball

USA U18 Team Finalizes Roster as it Cuts to 12

Chase Jeter Replaces Dwayne Morgan on US U18 Team