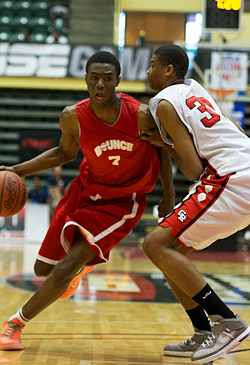 Andrew Wiggins is in Philadelphia for three days of meetings with the Sixers and a tour of the city that began Sunday and concludes with Tuesday’s workout, a source with direct knowledge confirmed to SNY.tv. Marc Spears of Yahoo! Sports first reported the news. “I’m excited,” Wiggins told CSNPhilly.com. “Been looking forward to this time for a long time, so I’m excited.” The former Kansas and CIA Bounce star will then work out in Cleveland on Wednesday and Milwaukee on Friday. The Cavaliers pick first, the Bucks second and the Sixers third in the June 26 NBA Draft. The Sixers also own the No. 10 pick in the June 26 NBA Draft. “I think [the Sixers do] fit my style,” Wiggins said, “but I also think Cleveland and Milwaukee do too, so wherever I go.” If the Sixers pick Wiggins at No. 3, they could pair him in the backcourt with reigning NBA Rookie of the Year Michael Carter-Williams. **For previous articles on Andrew Wiggins, click here.