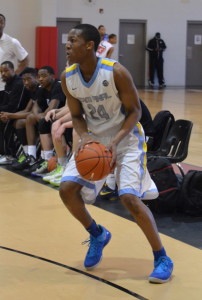 Tyus Battle picked up scholarship offers from Florida and Michigan, his father told SNY.tv Sunday. “Today he got offered from Michigan and Florida, which was a big deal,” Gary Battle said by phone. Stanford and Cal-Berkeley also called to express interest. The 6-foot-6 2016 Gill St. Bernard’s guard is also at Louisville Sunday and Monday and will then head to Kentucky later Monday and on Tuesday. He recently visited  Michigan and Villanova. “He’s probably going to look at the campus [Monday] with [assistant] Kenny [Johnson],” Gary said of Louisville. The Battles opted to stop in there Monday prior to visiting Kentucky. “Calipari called [Sunday] and said he was looking forward to seeing him on campus [Monday],” Gary said. “Coach Cal produces guys so it’s an honor,” Tyus said recently of Kentucky’s involvement. Battle averaged 22.5 points, 6.3 rebounds and 3.6 assists per game last season at Gill St. Bernard’s. Battle currently holds offers from UConn, Villanova, Providence, Rutgers, Seton Hall, Rhode Island, Miami, Wake Forest, Maryland, SMU, Virginia, Ohio State and Indiana, among others. Follow Adam Zagoria on Twitter And like ZAGS on Facebook