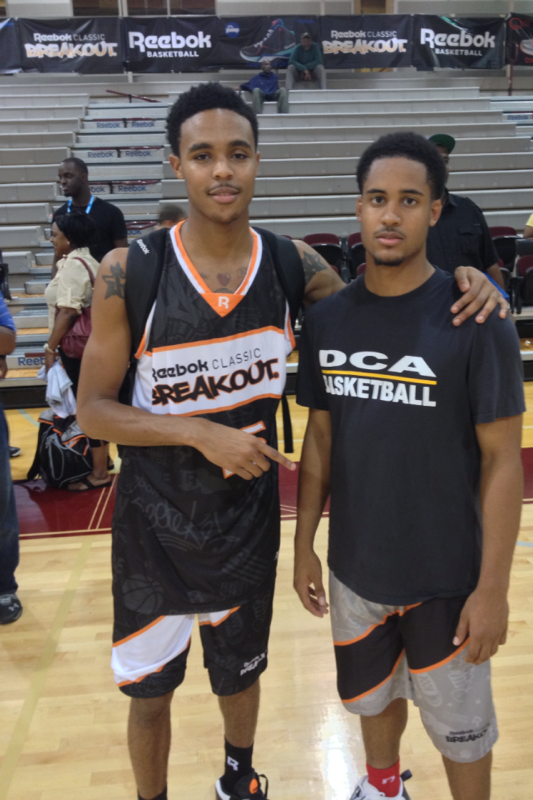 WEST ORANGE, N.J. — Jared Nickens, Romelo Trimble and Dion Wiley all share the same tattoo. Now the Maryland freshmen hope to share success at the next level, too. “We all got ‘MBK’ tatted on our leg, which stands for, ‘My Brother’s Keeper,'” the 6-foot-6 Nickens told SNY.tv at the recent Mary Kline Classic at West Orange High School. “I got mine a few months go and Dion [Wiley] and Melo just got theirs. Trayvon [Reed] hasn’t gotten his yet but I’m sure he will.” “We all got matching tattoos because we’re going to be close for a while,” said the 6-3 Trimble. The quartet will be joined next year by 7-foot Slovakian Michal Cekovsky, who isn’t in this tattoo club. Maryland also recently picked up Georgia Tech transfer Robert Carter Jr., who also wasn’t part of this tattoo group but said he believes this class can challenge for Big Ten and NCAA titles in 2015-16. Nickens and Trimble didn’t know one another well before this past year, but now the duo has become so close that Trimble, a Virginia native, stayed at Nickens’ house for the Mary Kline. The duo were the only Maryland commits in the game. “Me and Jared just met each other over the summer,” Trimble said. “I didn’t really know him like that because he’s on a different team, Sports U and I was on DC Assault. So we lost to them in Pittsburgh for the Jam Fest and I didn’t really have too much to say to him, but he told me he was committing to Maryland. We just started texting every day, our bond started building and we just got closer. “Ever since then we’ve been talking on the phone every day, talking about what we’re going to do next year for Maryland. And right now I’m staying with him at his house, that’s how close we are.” Said Nickens; “It’s great chemistry and we have a great relationship off the court as well, so it’s just going to help us more on the court. Me and Melo are real close, me and Dion are close, and Trayvon we all talk.” Maryland is undergoing a dramatic transformation as it moves into the Big Ten from its longtime perch in the ACC. They also lost five transfers after this past season, in which the Terps finished 17-15, 9-9 in the ACC. Moving forward, the 7-foot-1 Reed is out 8-12 weeks with a fractured right ankle sustained this past April in high school. Still, the new recruits are understandably excited about the future. “[Coach Mark Turgeon] stayed in contact and told us that it’s more opportunity for playing time,” Nickens said of the transfers. “And now have to come in prepared to work hard so we can contribute.” Nickens, who will play the two and three at Maryland, comes from a highly successful AAU program in Sports U, where he played alongside a slew of other high-major players, including Class of 2013 guys Hallice Cooke (Iowa State), Josh Brown (Temple) and DeAndre Bembry (St. Joe’s) and 2014s Karl Towns Jr. (Kentucky), Quadri Moore (Cincinnati) and Wade Baldwin (Vanderbilt). “I was able to learn from all those guys, even the ones in my same class,” Nickens said. “Because I stay in touch with them, I asked them what I should focus on coming in my freshman year, so it helps a lot. Hallice just told me stay focused and be confident and just always work hard and stay focused on what you do.” Trimble figures to get heavy minutes at the point right away. “I don’t want it to get to my head, I just want to come in and work hard like everybody else because nothing’s given to you,” Trimble said. “I won’t find out until after I work out and when the season comes if I’m going to start.” As for the move to the Big Ten, Nickens and Trimble both said they were looking forward to playing North Carolina and Duke in the ACC, but have now embraced the new conference. “The conference doesn’t matter to me between ACC and Big Ten because there’s no dropoff in talent so I’m still looking forward to playing in the Big Ten,” Nickens said. “I would’ve loved to play against them but now I get the chance to play against Michigan State, Michigan and Indiana so it’s just as fun.” Said Trimble: “People think that we’re going to be a young team and we don’t have any guard play. We’re just going to go in there and work hard and show everybody why we’re going to be a national championship team.” Follow Adam Zagoria on Twitter And like ZAGS on Facebook

USA Basketball Cuts U18 Roster to 15