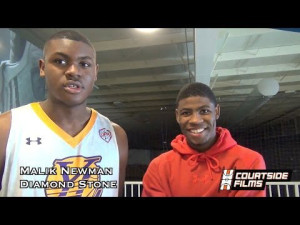 Diamond Stone, the new No. 1 player in the Class of 2015 according to Scout.com, visited UConn this past weekend in what can only been seen as a huge coup for the new minted NCAA champions and head coach Kevin Ollie. Stone’s camp has maintained a low-profile on his recruitment, keeping interviews to a minimum. Yet given UConn’s history with sending big men to the NBA — Andre Drummond, Emeka Okafor and Charlie Villanueva to name a few — it’s safe to say Ollie reminded the 6-foot-10, 255-pound Stone of that tradition. It was originally reported that 6-foot-3 Mississippi native Malik Newman would also make the trip to UConn, but he told Evan Daniels of Scout he was unable to attend. Still, Stone and Newman have maintained that they intend to go to college as a package deal. “It’s 100 percent,” Newman told SNY.tv over Memorial Day Weekend at the NIKE EYBL stop in Minneapolis. “Hopefully, everything works out, but right now everything is going good. That’s the plan — we don’t plan on changing.” Package deals are all the rave these days in recruiting circles. Plenty of recruits have talked about them recently, but rarely do they actually get done. Stone is averaging 24.8 points, 11.0 rebounds and 4.3 blocks per game this spring on the Under Armour circuit. Newman has his Jackson Tigers AAU squad through to the EYBL Finals at Peach Jam next month. Follow Adam Zagoria on Twitter And like ZAGS on Facebook

Tyus Battle to Visit UConn as Huskies Are in Mix for Package With Thornton; Ray Smith Has New List (UPDATED); Derrick Jones to Visit UConn