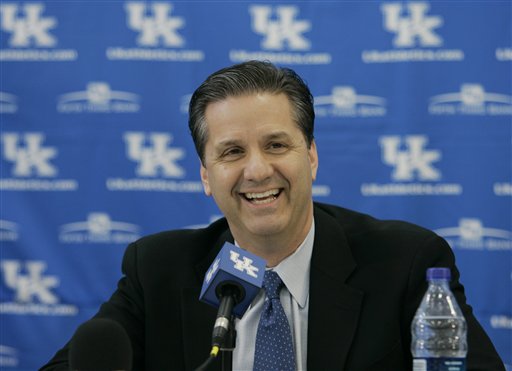 Kentucky coach John Calipari, who has been linked to various NBA openings, including the Los Angeles Lakers’ job, has signed a new seven-year contract extension that runs through the 2020-21 season. Calipari will earn $6.5 million next season and the annual salary will escalate annually, eventually reaching $8 million beginning in 2018-19. He also has incentives based on APR scores. There is no buyout in the contract, a source told SNY.tv. “Basketball has long been the marquee sport at the University of Kentucky,” Kentucky AD Mitch Barnhart said. “It’s a sport that the traditions of this university and this state have been founded on. They were developed and sort of started from the get-go by Adolph Rupp and through many good people since. What Cal has done is returned us to those glory days of Final Fours and championship efforts, great players, and all along he’s helped young people understand the responsibility of going to class, of the commitment to each other and to a program that has as rich of a tradition as this one does. It has long been our goal over the last three to five years that Cal enjoy this as his final stop in coaching and that he has an opportunity to finish his career at the University of Kentucky and hopefully set standards and win championships that will be remembered for many, many years to come.” 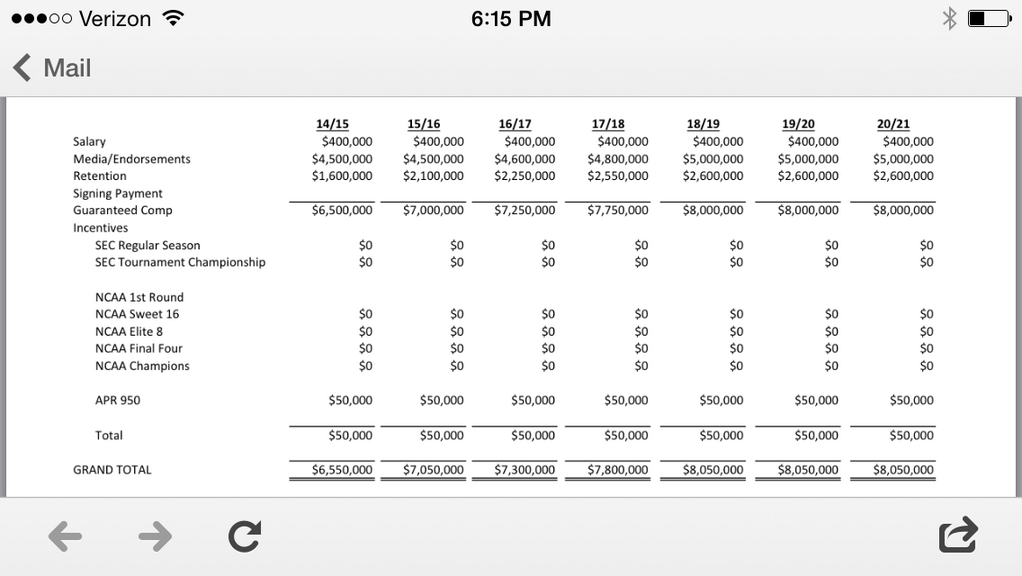 “Under Coach Cal’s leadership, the most storied program in NCAA basketball has reached new heights of success and excellence,” said UK President Eli Capilouto. “And that continued success, in which Coach Cal plays a critical leadership role, is a major reason why we have one of the handful of programs in the country that is financially self-sustaining and that has entered into an unprecedented partnership to fund nearly two-thirds of a more than $100 million science building dedicated to learning and research. As important to me, the Coach, his staff and our entire program are focused intently on putting students first in everything that they do. Nowhere is that more evident than in their continued efforts to ensure that our student athletes are prepared for success in life as well as in sports. They perform on the court and in the classroom.” In five seasons, Calipari has led the Wildcats to a 152-37 (.804 winning percentage) overall mark, including four Elite Eights, three Final Fours, two appearances in the national championship game and the 2012 national championship. Under Calipari’s tutelage, 17 Wildcats have been selected in the NBA Draft in four seasons, including 13 taken in the opening round, two No. 1 overall selections, five top-five picks and eight lottery picks. Calipari has guided Kentucky to two Southeastern Conference championships, a pair of SEC Tournament titles and has comprised 20 consecutive 20-win seasons, leading all active coaches with that streak. He is a mere three wins shy of becoming just the 13th active Division I coach to achieve 600 on-court victories. “I’d like to thank Mitch (Barnhart) and Dr. Capilouto for their commitment to me, my family and the basketball staff,” Calipari said. “I’ve said over and over that I have the best job in the country. With the continued support from our administration and the greatest, craziest, fans in college basketball, we have accomplished a lot in our five quick years, but we still have lofty goals for the future. We want to continue to help young people and their families reach their dreams, while at the same time maintaining our success on the basketball court, in the classroom and in the community.” Kentucky said in a statement the men’s basketball team posted a 3.11 cumulative grade-point average during the 2014 spring semester, including 10 student-athletes who amassed a 3.0 or better. It marked the sixth time in the last seven semesters the basketball team has achieved a 3.0 or higher GPA. In addition, Kentucky totaled a perfect APR score of 1,000 for the 2012-13 year. Since Calipari arrived in Lexington, his teams have posted one-year APR scores of 979 in 2009-10, 979 in 2010-11, 977 for the 2011-12 national championship season and 1,000 for 2012-13. Kentucky’s most recent four-year composite score of 989, ranked in the 80th-90th percentile among all Division I basketball scores and the 60th-70th percentile within all Division I sports. The NCAA’s average APR for all Division I men’s basketball schools was 957. Additionally, all 10 players at UK who were eligible to graduate by the end of their senior years, under Calipari, walked away with a degree in hand. Two of those players (Jarrod Polson and Patrick Patterson) earned a degree in just three years. Kentucky also said Calipari’s foundation, The Calipari Foundation, has raised millions of dollars to help the lives of those in need in the Commonwealth and across the country, and in 2010, he used a telethon to raise more than $1 million for victims of the devastating earthquake in Haiti. He followed that up with another telethon in 2012 that raised $1 million for victims of Superstorm Sandy that ravaged the New England coast. A year after helping raise $350,000 for charity during the inaugural UK men’s basketball alumni weekend, Calipari was the driving force behind the more than $1 million that was donated to local and national organizations during the second annual alumni weekend. Kentucky has hauled in the top-rated recruiting class in four of five seasons under Calipari’s direction. This year’s four-player class is rated No. 2 overall by most recruiting services and will accompany eight scholarship players from the 2013-14 national runner-up squad. Kentucky is set to return 67 percent of its assists (300), 65 percent of minutes played, 59 percent of its scoring (1,773) and 54 percent of its rebounds (872) produced from its 2013-14 roster, which includes Willie Cauley-Stein, Aaron and Andrew Harrison, Dominique Hawkins, Dakari Johnson, Marcus Lee, Alex Poythress, and Derek Willis as scholarship returnees. The Wildcats will also welcome four McDonald’s All-America and Jordan Brand Classic players in Devin Booker, Trey Lyles, Karl-Anthony Towns and Tyler Ulis.