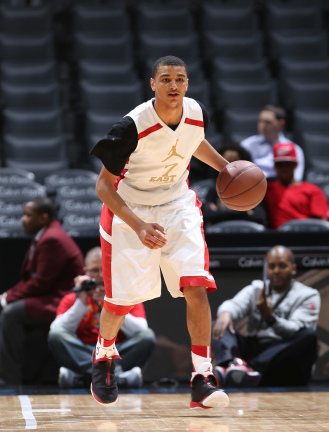 WEST ORANGE, N.J. — Beginning on June 15, Jamal Murray’s phone is going to blow up. So will those of his coaches, Larry Blunt and Tony McIntyre. As one of the most talented and poised players in the Class of 2016, Murray, a 6-foot-5 point guard from Orangeville (Ontario) Athlete Institute, is set for a barrage of calls or messages on June 15, the first date that college coaches can begin unlimited phone and messaging contact with rising juniors. “A lot of people have called and said they’re waiting until the 15th [of June] to call and offer just because of the rule,” Blunt told SNY.tv. Saturday night when Murray went for 13 points in the Mary Kline Classic Underclassmen game. That week, Blunt said he had heard from Michigan, Michigan State, Syracuse, N.C. State and Washington State. On Tuesday, Ohio State and Georgetown were the latest to call on Murray, who has opted to stay in Canada and play at Athlete Institute instead of fleeing South of border to play for an American prep powerhouse. So far, Murray has picked up offers from Michigan State and Illinois, but purposely plays down his thoughts on recruiting. “I still got too much high school to think about that,” he said at the Mary Kline. He did enjoy the Michigan visit, though. “I loved it,” he said. “They played against Indiana when I went. It was a great experience.” He also “loved” the Syracuse trip he went on. “I loved it and I’m just trying to see more and see what other schools have to offer,” he said. As for Michigan State, Murray said he “doesn’t know much.” “They came and watched one of our practices once, but other than that I don’t know much,” he said. Murray has been loosely compared to former Syracuse point guard Tyler Ennis, a projected lottery pick who also played for CIA Bounce. “Our game is comparable,” Murray said. “He looks to pass more and I can get my own.” Murray said he “can play all positions but [prefers] the one mostly.” At 6-5, he towers over many opposing point guards. In the meantime, he’s keeping his head down and isn’t worried too much about college He isn’t even on Twitter so he doesn’t follow much of the recruiting scene. “I don’t like to put too much clutter in my brain,” he said. “I don’t need to know about that and also I don’t really like Twitter.”

Brandon Childress Has Something to Prove