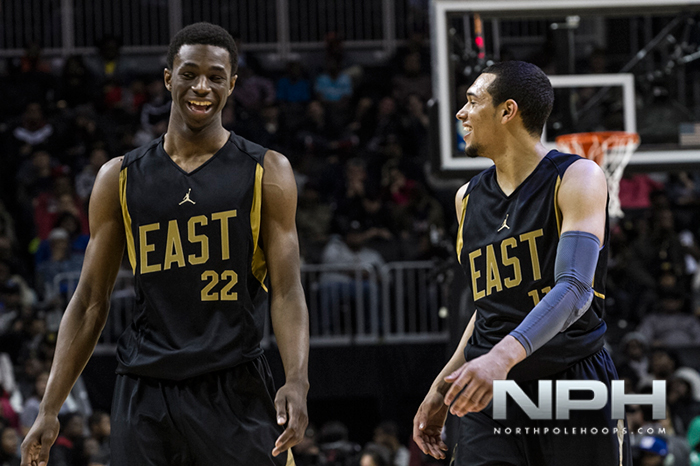 NEW YORK — Of the seven college players expected to be on hand Thursday night at the NBA Draft Lottery at the Best Buy Theatre, two are not only from the same city in the same country, but from the same AAU program as well. Andrew Wiggins of Kansas and Tyler Ennis of Syracuse, former teammates with the Toronto-based CIA Bounce program, will both be on hand for the draft lottery. Despite reports that Ennis was a late addition, he was invited three weeks ago, a source close to the situation told SNY.tv. The 6-foot-8 Wiggins is projected as the potential No. 1 pick in the June 26 NBA Draft, while the 6-2 Ennis is also projected as a lottery pick. “I think it speaks volumes about where Canadian basketball has come and I think it speaks volumes about how incredible a story it is for an AAU program out of Toronto to be able to consistently develop not just NBA talent, but lottery talent,” Roy Rana, the Canadian Junior National Team coach who has coached both Wiggins and Ennis, told SNY.tv by phone. “We’ve done it the year before [with Anthony Bennett] and now these two potentially both in the lottery this year. It’s a pretty unique and special story for Canadian basketball, so it’s a lot of pride for our country and a lot of pride for CIA Bounce.” The Milwaukee Bucks enter Thursday with the best chance — 25 percent — of landing the No. 1 overall pick, while the Philadelphia 76ers have a 19.9 percent chance and the Orlando Magic have a 15.6 percent chance. “There’s not a Tim Duncan or LeBron James available this year, but this is one of the best drafts in terms of talent,” ESPN analyst Jay Bilas said, according to USA Today. “I’m not sure there’s a firm handle on who will go No. 1. “Most of these teams will be drafting based on upside, what a player’s ceiling is. With Wiggins, he’s really athletic but does he have a takeover personality? That’s an industry-wide question mark. [Jabari] Parker is probably the most polished and prepared to play right now. And with [Joel] Embiid, every time you watch him he’s gotten better and he’s got an aptitude to improve that leaves your jaw on the floor. Do you pass up the potential to go with the sure thing right now? That’s what these teams will have to decide.” Wiggins said Monday on ESPN that he believes he should be the No. 1 overall pick, and he is projected by both Chad Ford of ESPN and DraftExpress.com to go at No. 1. 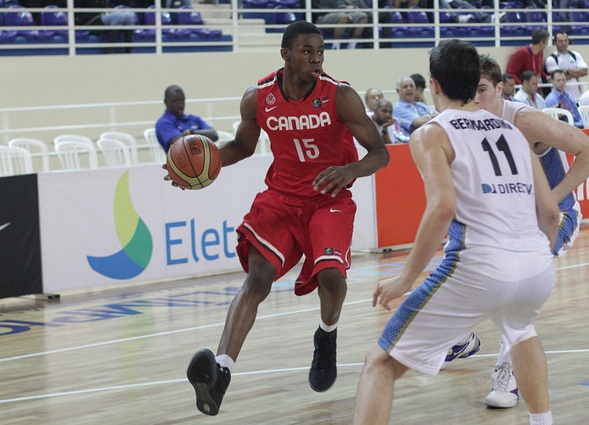 Rana is aware that NBA personnel wonder about whether Wiggins’ has a “takeover personality,” but he believes he does. “I think he’s going to be a star in the NBA,” Rana said. “I think the beautiful thing about Andrew is he is so self-aware about who he is as a player and he knows what he needs to work on and he knows the areas he needs to improve in, and that’s always a good sign for a young player. If you know where you need to get better, then that’s half the battle and now he’s just gotta do the work and I’m confident he’ll do it.” Rana remembers back  when Canada played Argentina in the bronze-medal game in Brazil in the FIBA U18 World Championship in 2012. Wiggins finished with 14 points, 11 rebounds and 3 assists in a 68-66 win. “He took multiple charges, he dove on the floor for loose balls, he brought the ball up the floor at the point and completely dominated the game,” Rana said. “For me in a game that meant so much, that spoke volumes about his desire just to win and everything that he did to make that happen spoke volumes. He was clearly the guy and accepted that role.”

As for Ennis, there are concerns about his athleticism and ability to defend NBA point guards like Russell Westbrook, Damian Lillard, Kyrie Irving and Derrick Rose. “I think anybody who’s critical about his athleticism will be pleasantly surprised when they get him in their environment and realize how athletic he really is,” Rana said. “He’s a very good athlete, both vertically and horizontally. He’s explosive and he gets by people. He doesn’t do it by accident and I think he’s deceptively quick. Whoever takes him is going to be pleasantly surprised with how athletic he really is.” Ennis also said last week at the NBA Draft Combine in Chicago that people are sleeping on his defense. “On the defensive end, I think I’m a lot better than people expect,” the former St. Benedict’s Prep star told ESPN’s Andy Katz. “Coming from Syracuse there are a lot of questions on the defensive end, but I think through workouts and through the draft process I’ll be able to show that I have defense. I just try to improve on my speed and improve on my strength for the next level and just get ready to go up against the best PGs in the world.” In addition to Wiggins and Ennis, five other Canadians are eligible for the NBA Draft, including former CIA Bounce players Melvin Ejim and Sim Bhullar. “Having two potential lottery picks is huge for our program, potentially two back-to-back [No. 1] picks is even bigger,” Tony McIntyre, Ennis’s father and the CIA Bounce coach, told SNY.tv. The success of Wiggins and Ennis has also helped CIA Bounce recruit other players, some of whom — such as 6-5 2016 point guard Jamal Murray of Athlete Institute — may one day go on to the NBA themselves. “We’ve seen an increase in the amount of kids definitely,” McIntyre said. “It shows that the formula and the path is there. They just gotta stay on path, make sure that they focus on their schoolwork and then pick the right universities or colleges to makes sure they can continue working. “The one thing we’re very conscious of is to make sure that they know that it’s not an easy route. A lot of things have to fall in line for them to become an NBA player.” **For previous articles on Andrew Wiggins, click here.

Chase Jeter to Announce in August