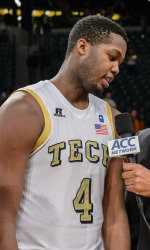 Transferring Georgia Tech big man Robert Carter Jr. is currently on a visit to St. John’s. If all goes well, it’s possible he won’t take any more visits and could commit to the Johnnies tomorrow when he leaves the Queens school or later this week. “We might like it to a point that we don’t have to go anywhere else,” Winfred Jordan, Carter Jr.’s AAU coach, told SNY.tv by phone Monday. “He could stop right now.” Jordan said Carter Jr. is also considering South Carolina, Maryland, Baylor and Texas, but no other visits are planned. “He’s probably going to take two more visits,” Jordan said before he mentioned that St. John’s could end up being the only one. “He’s still there now,” Jordan said. “He loves St. John’s. Who wouldn’t love St. John’s? You get to play at Madison Square Garden. It’s one of the best colleges in the history of college basketball.” Jordan added: “I been knowing Steve Lavin and Tony Chiles for a while and we were exited when they showed an interest in him.” The former Georgia Tech power forward averaged 11.4 points and 8.4 rebounds per game for the Yellow Jackets in his sophomore year. He would have two years of eligibility after sitting out the 2014-15 season. After a bleak period for the Johnnies in which they failed to make the NCAA Tournament, were bounced in the first round of the NIT by Robert Morris and then lost JaKarr Sampson to the NBA Draft and seemingly Chris Obekpa to transfer, Lavin has regained the momentum in recent weeks. Obekpa opted to return to St. John’s, as did guards Rysheed Jordan, Phil Greene and D’Angelo Harrison. Lavin landed a pledge form 6-11 Christ the King big man Adonis Delarosa and followed that up with a pledge from 6-8 Westchester Community College forward Keith Thomas. “The kid is a beast on the court,” Harcum College coach Drew Kelly told the New York Post. “Keith Thomas destroyed us every time we played them, and we had one of the best, if not the best, front lines in the country.” Meantime, St. John’s fell out of the running for transferring Cincinnati forward Jermaine Lawrence, who visits Manhattan and Fordham Wednesday and is expected to decide soon thereafter among those two, Iona and Hofstra. Still, if they land Carter Jr., they will be getting another established post player for two years beginning in 2015. And like ZAGS on Facebook