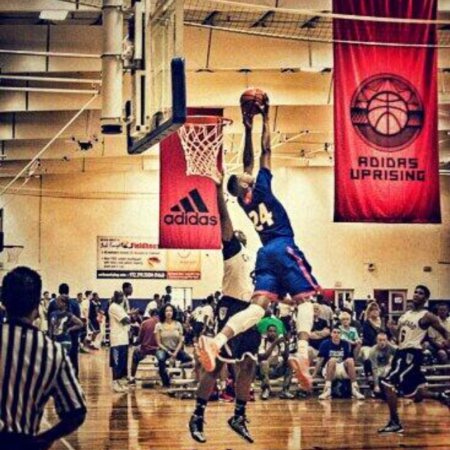 By CHIP MILLER & ADAM ZAGORIA 2015 Las Vegas wing Ray Smith announced via Twitter on Tuesday evening that he had cut his list to 10 programs, tweeting, “My Top 10,” followed by a photo of the ten schools. His list consists of UCLA, USC, Arizona, Georgetown, Louisville, Texas, Arizona State, Wake Forest, Oregon and Texas. As late as February, Dream Vision director Clay Williams told SNY.TV that Kentucky, Duke, Memphis and others were showing interest in Smith with Duke looking to potentially get to Vegas to see Smith and Chase Jeter at the same time. With his announcement, some of the biggest schools in college basketball will be looking elsewhere. Recently, Smith talked with SNY.tv about two of his 10 schools. On Texas, “Really just sat down and talked about me really. He got to know me a little bit better. It was cool.” On UCLA, “UCLA, same thing, tradition is disgusting, they’re really good. But with their fans, they’re more like ‘Oh, we got this.’ You know, they’re more relaxed, they’re not as arrogant.” Smith said he’s looking for an “arrogant” school, presumably one that’s confident. “The crowd arrogance,” he said. “I like an arrogant school. My high school is pretty arrogant. We represent to the fullest. Tradition in their school. How they play, of course I like running teams. The West coast runs more but some East Coast teams run also, Midwest they run a little bit. That’s pretty much the main things. The way they play, their tradition and how they represent themselves.” Follow Adam Zagoria on Twitter And like ZAGS on Facebook