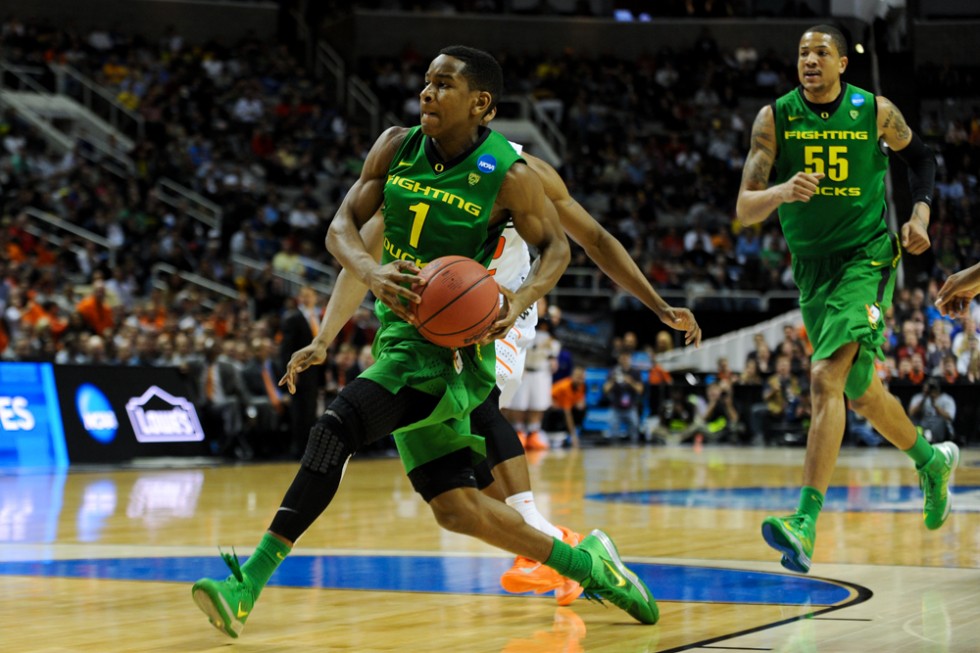 A trio of Oregon players —  junior point guard Dominic Artis, junior guard Damyean Dotson and sophomore forward Brandon Austin — are not currently participating in team activities, the school announced Monday. The trio are the subject of a forcible rape allegation, details of which can be found in this graphic police report released Monday evening by the Eugene Police Department. The Oregonian is all over this story:

The district attorney’s office listed only Dotson as a suspect when it wrote April 14 that due to insufficient evidence it would not pursue prosecution. It also did not list any of the charges Dotson had been accused of. However, it added, “While there is no doubt the incidents occurred, the conflicting statements and actions by the victim make this case unprovable as a criminal case.” Artis and Dotson were contacted by law enforcement after the incident and told investigators the sex was consensual. Austin was also contacted by police but asked that any inquiries be handled by his lawyer.

And the University of Oregon community is predictably outraged (via The Oregonian):

“We are deeply concerned about information contained in the police report recently released by the Eugene Police Department,” Oregon president Michael Gottfredson said in a statement Monday night. “Federal laws that protect the privacy of all students preclude the university from commenting about students. However, the university takes allegations of misconduct very seriously. In addition, a full range of services and support are offered to students, including those required by Title IX and others beyond the requirements of Title IX. The university has established internal conduct processes for handling misconduct allegations. At this point, we ask that you please respect these processes and student privacy.” Sam Dotters-Katz, the student body president, added: “As ASUO President, I believe it’s essential that the student body focuses on standing on the side of the survivor and all survivors of sexual violence, not on how this affects our team’s competitiveness next year. These deeply disturbing allegations undermine the hard work and emphasis that our community has made on sexual assault prevention.” No athletic department officials would comment Monday night after the police report was released.

The 6-foot-1 Artis will transfer, his father, Derrick Artis, confirmed to SNY.tv after it was first reported by ESPN.com. Artis averaged 8.5 points and 3.2 assists as a freshman in 2012-13 but sat out the first nine games of the 2013-14 season after he was suspended for selling team-issued gear along with teammate Ben Carter. The 6-6 Austin transferred to Oregon from Providence in January. He and Rodney Bullock had both been suspended by Providence in December and a Wall Street Journal story in March linked Austin and Bullock to a sexual assault case at Providence. Lonnie Lowery, Austin’s mentor, said he had no comment on the situation at this point. The 6-5 Dotson averaged 9.4 points and 3.2 rebounds last season. Oregon returns only redshirt junior guard Joseph Young and redshirt sophomore forward Elgin Cook. Dana Altman’s club brings in a five-man recruiting class that includes point guard Casey Benson, shooting guard JaQuan Lyle, small forward Dwayne Benjamin and power forwards Ray Kasongo and Michael Chandler. Photo: Daily Emerald Follow Adam Zagoria on Twitter And like ZAGS on Facebook