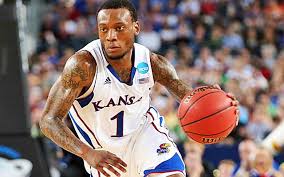 Kansas junior point guard Naadir Tharpe will transfer, the school announced. It was first reported by Jeff Goodman and Alex Kline. The 5-foot-11 Worcester, Mass., native and former Brewster (N.H.) Academy floor general averaged 8.5 points and 5.0 assists last season, but Kansas’ point guard situation never appeared settled. “Naadir and I have talked numerous times since he’s been here about his role and about his situation back home with his daughter,” Kansas coach Bill Self said in a statement. “He’s told me many times how much he misses his little girl and she’s had some health issues that has certainly made it difficult for him to be away from her for this extended period of time. She’s doing very well now, but Naadir approached me after the season was over about him wanting to be closer to her. This is his decision to try and accomplish that.” Said Tharpe: “Due to extenuating circumstances within my personal life, I will no longer be attending the University of Kansas. My daughter has current medical issues that require weekly visits to her physician, as well as with a specialist. At this juncture, I feel it is best to be closer to home where I can assist and support in any way necessary.” Kansas has Frank Mason and Conner Frankamp still in the fold and are in the mix for another Brewster point guard, Devonte’ Graham, who is down to Kansas and N.C. State. Tharpe originally chose Kansas over Oklahoma and St. John’s. Follow Adam Zagoria on Twitter And like ZAGS on Facebook