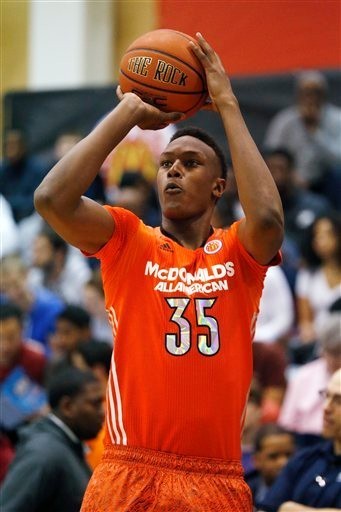 Myles Turner ended the suspense on Wednesday, announcing on ESPNU that he will stay in his home state and play for the Texas Longhorns. “I will be pursuing my education and I’m excited to be part of the men’s basketball program at the University of Texas, baby,” the 6-foot-11 Trinity Euless big man said as he pulled out a floppy burnt orange Longhorns hat. The No. 2 prospect in the ESPN 100, Turner also considered Kansas, Duke, Ohio State, Oklahoma State, Texas A&M and SMU. A tremendous shot-blocker who can score with either hand and also step out and shoot, he will join a Texas front line that also includes 6-9 Cam Ridley and 6-10 Prince Ibeh. “He has tremendous potential,” longtime New York recruiting analyst Tom Konchalski told SNY.tv. “I don’t know if he’s going to be the impact player right off the bat. He’s going to help them, but he’s not going to have Kevin Durant-like impact right away. “But down the road he has as much potential as any big guy in the class. He’s skilled, he just needs to get stronger, develop a little more of a back-to-basket game. But he’s so long. He’s mobile, agile, but not yet hostile. That’s a tremendous get for them.” Turner took his last official visit to Texas and said “a lot of things went into this decision.” “Just watching Texas work last year, they’re a real blue-collar program,” Turner said. “The only reason I’m here is through hard work and I feel that’s what Texas has done and can do for me in the future. I really like their work ethic going forward. I had a great visit down there. It’s a great family atmosphere down there. And to join these guys and hopefully do something special next year would mean a lot. And Coach [Rick] Barnes and the whole rest of that coaching staff they’ve shown a lot of support. They’ve expressed to me how special things would be down there and I believed it. “I’m happy to be a Texan. Always been a Texan my whole life. There’s a lot of pride coming from the state of Texas and to stay in state means a lot to me.” Turner attended a Texas basketball camp in middle school and met Durant, one of his idols. “It played a little bit in the decision, not a whole lot, but Kevin Durant is of course my favorite player,” Turner said. “I’ve admired him ever since I used to go down to camps at the University of Texas when I was younger. I just wanted to emulate him, his work ethic on and off the court….Just seeing what he was able to do for that program, it kind of inspired me.” Kansas had hoped to have Turner come in and replace Joel Embiid, and Embiid and recruits Kelly Oubre and Cliff Alexander had all spoken to Turner at the recent Jordan Brand Classic. Ultimately, their pitch was not enugh. Turner missed the Jordan Brand Classic with an ankle injury sustained at the Nike Hoop Summit, and there are some questions about his long-term healthy . The Texas native’s standing as the No. 15 pick in the 2015 NBA Draft represents a slip after he had previously been as high as No. 2 behind Jahlil Okafor and ahead of Alexander. “He’s a long way away physically from being able to play in the NBA,” Konchalski said. “I think he has tremendous potential, but he is a long way away physically.” Follow Adam Zagoria on Twitter And like ZAGS on Facebook