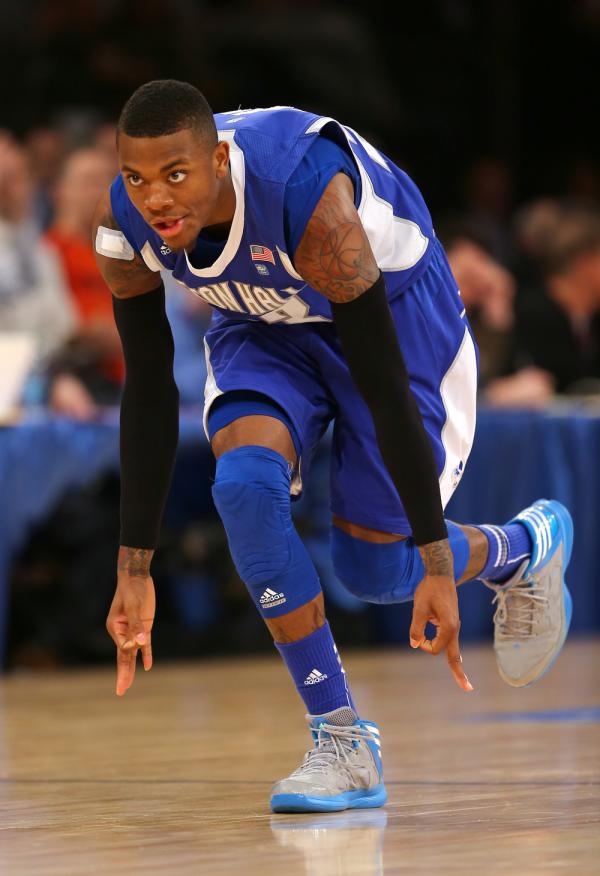 After notching a vertical leap of 24 inches at the Portsmouth Invitational April 16-19, Fuquan Edwin decided he needed to do some more calf raises. Now he’s doing 200 per night with the aim of adding a couple of inches to his vertical leap. “I’m excited. I’ve been doing some calf raises,” the 6-foot-6 Paterson, N.J., native told SNY.tv by phone on Thursday. “Coming from Portsmouth, I didn’t like my vertical jump.” Edwin, the reigning Big East Defensive Player of the Year, is seeking to become the first Seton Hall player chosen in the NBA Draft since 2001, when the late Eddie Griffin and Samuel Dalembert both went in the first round. DraftExpress.com currently projects him as the No. 59 pick out of 60 — going to the Toronto Raptors. “There’s a very, very good chance he’ll be drafted,” Edwin’s agent, Joel Bell, told SNY.tv. “He’s going to visit a lot of teams, we have a lot of workouts already planned. He’s got a very good chance to be drafted and to be in the NBA next year.” Edwin said he will work out for the Utah Jazz May 8, but was unaware of any other planned workouts. At Portsmouth, he had a terrific first game in which he went for 22 points on 9-for-16 shooting and 3-for-3 from deep. After that, though, he felt he didn’t play up to his capabilities. “I think I did OK,” Edwin said. “I definitely think I could’ve did better. I mean, the first game I definitely hit a couple shots and that helped me out but I just couldn’t find my rhythm in the second and third games, it was tough.” Said one veteran NBA scout who attended Portsmouth: “He may be a late-second round pick. Good athlete. Runs well, good defender, struggles with his shot, needs the shot doctor to fix his shot. Tough kid, competes.” Said Bell, Edwin’s agent: “He did two things very well [at Portsmouth] that NBA guys are looking at. No. 1, he shot the ball very well from outside. He shot 71 percent from the NBA 3-point line, he shot 5-for-7. That’s good in any league. He was active very on defense. He would come into a game and have an impact defensively, create havoc, make things happen. “From an NBA perspective, they’re looking at guy who can come into a game, knock down shots from the perimeter off a kickout. I think he helped himself.” Said Seton Hall coach Kevin Willard: “I’ve gotten a lot of positive feedback, not just on Portsmouth but on him in general. I think there’s teams out there that really like him and those are the teams that are really focusing in on him.” Edwin is currently finishing up his degree work at Seton Hall and will graduate May 19. He is waiting to find out if he’ll be invited to the Chicago Pre-Draft Camp. “He’s going to stay here, work out with us, lift with us, so this will be his home base,” Willard said. “He just focusing on staying in good shape, staying in good form.” Willard is looking forward to June 26, when Edwin might become the first Pirate drafted in more than a decade. “I just think it’d be tremendous for him considering where he started,” Willard said. “People said he couldn’t play in the Big East, he wasn’t a Big East player. To be the defensive Player of the Year and to have a chance to be drafted, I think it says a lot abot him and his character and his work ethic.” Follow Adam Zagoria on Twitter And like ZAGS on Facebook