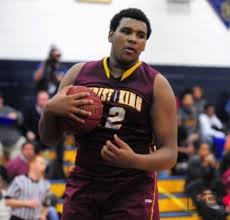 By JOSH NEWMAN Special to ZAGSBLOG NEW YORK – After flirting with a transfer, Chris Obekpa will return to St. John’s, which is just fine with Red Storm commit Adonis Delarosa. “When I heard he was leaving, I was a little mad about it, just because I would’ve had someone that was there that could teach me some stuff because he was already in the system for two years,” Delarosa, who has yet to sign his National Letter of Intent said after going for 12 points and eight rebounds as his white team defeated the black team, 102-99, in the Jordan Brand Classic regional game. “I got the news he was coming back and I was just excited. Me, him and my brother Joey Delarosa can battle it out next year.” With or without Obekpa on the roster, it remains to be seen how much Delarosa will see the floor, but having Obekpa there in practice can only help the 6-foot-10 Christ The King senior. Obekpa has established himself as one of the nation’s premier shot-blockers over the last two years, while Delarosa is still coming into his own as a player. He was listed on the JBC roster at 280 pounds after reportedly weighing over 300 at one point. He noted postgame that conditioning was the biggest area he needs to improve on. Working with and against Obekpa, plus keeping his weight and conditioning under control, will only help Delarosa once he gets to St. John’s. “I feel like we can help out each other,” Delarosa said. “He’s not a low-post scorer, but he blocks shots and works around the rim, so he can show me how to get my shot off against athletic defenders and I can show him how to score in the post.” Delarosa is not the only forward Red Storm head coach Steve Lavin has pursued. The Johnnies are also involved with 6-foot-8 Westchester Community College forward Keith Thomas and 6-foot-8 Adom Jacko of Chaffey (CA) College. Lavin is also in the mix for Chicago prep forwards Josh Cunningham and Marlon Jones. Including Delarosa, St. John’s has four open scholarships. Whoever Lavin lands, Delarosa isn’t likely to be fazed by it. “What I offer to the table, not everybody offers it,” Delarosa said. “I’m an inside presence and everybody does their own thing. I’m me, whoever they bring in is them. They have to perform and produce the same way I have to.” Follow Josh Newman on Twitter