Calipari Says He Doesn’t Know How Many Cats Will Leave, Reveals ‘Tweak’; Source: ‘Slice’ to UK is ‘Done’ 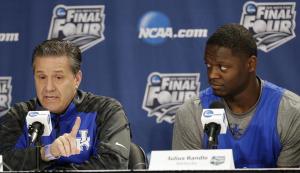 John Calipari says he doesn’t know how many of his current players will head to the NBA Draft, but he hopes it’s fewer than five. “I don’t know. I really don’t know right now,” Calipari said Monday on “The Dan Patrick Show,” according to Dan Bodner of KYSportsConnection.com. According to Bodner, Calipari said he hopes fewer than five players go pro so he can coach them for another season. Julius Randle, Willie Cauley-Stein and James Young are all projected as first-round picks, while twins Andrew and Aaron Harrison are projected as late-first or second-round picks should they decide to go. Randle’s mother said last week the family would meet over the weekend to discuss his plans. The Harrisons, freshman big man Dakari Johnson and sophomore forward Alex Poythress are all projected in the 2015 Draft by DraftExpress.com. “The good news is eight can go, and I know eight aren’t going [this year],” Calipari said. Marcus Lee will remain at Kentucky next season, his brother told SNY.tv. Calipari, who is making the media rounds to promote his new book, “Players First: Coaching from the Inside Out,” also revealed the infamous “tweak” he employed to help Kentucky reach the NCAA championship game. Essentially, it was having Andrew Harrison pass more to get his teammates involved. “I was trying to make the game easier for Andrew,” Calipari said on CBS. “I got tapes of Deron Williams, who averaged nine assists throughout his career in the NBA. We had a game where he had 11 assists and I showed Andrew. I said look at this. Let’s watch. Would you have passed or shot? He said, ‘I would have shot.’ “…Well, Deron was throwing balls to everybody. And so I said Monday, you will not shoot one basketball. You will pass. We’re going to run less plays. You will create shots. We will chart. We’re not telling our team.” SOURCE: ‘SLICE’ TO UK IS DONE Barry “Slice” Rohrssen will fill the vacancy on Kentucky’s staff created by the departure of Orlando Antigua to South Florida, a source with direct knowledge of the situation told SNY.tv. “It’s done,” the source said. One of the top recruiters in New York City over the last two decades, Rohrssen served two stints as an assistant at Pitt and was also the head coach at Manhattan.

Obekpa Tweet Gives Hope He May Remain at St. John's

Montrezl Harrell Will Return to Louisville