Gene Simmons, Paul Stanley Have Discussed Replacing Themselves in KISS 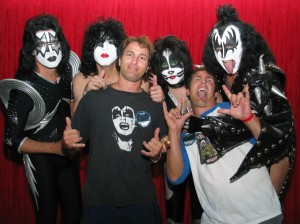 Gene Simmons and Paul Stanley have discussed replacing themselves with new members in Kiss “and having Kiss continue to the end of time,” according to the cover story of the new Rolling Stone. “Physically, I won’t be able to do this into my seventies,” the 64-year-old Simmons told the magazine. “I’m 64 now. Three more tours. Two, if I have a life change of some kind.” (Note to Gene: My brother-in-law and I, who posed with you guys for this photo, are available to fill in.) Simmons and Stanley are the only original members of the band formed in 1973 still with Kiss, which will be inducted into the Rock And Roll Hall of Fame on Thursday but won’t perform at the event at Barclays Center. Tommy Thayer and Eric Singer have replaced Ace Frehley and Peter Criss, yet continue to wear the original makeup of those two. Criss “relinquished the rights to his character when he left” and “Frehley licensed his,” according to the Rolling Stone piece written by Brian Hiatt. 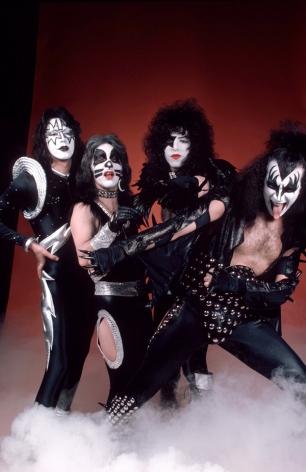 “I’m not upset that they got the bigger barrel of the monies and the bigger homes and bigger cars and and the bigger watches,” Frehley told Rolling Stone. “But I’m pissed at myself that my makeup slipped through my hands. That’s my cross that I bear.” None of them will perform on Thursday, which is too bad for fans. Simmons and Stanley wanted to play with Thayer and Singer, but the Hall of Fame wanted the original quartet. “It is over 13 years since the original lineup has played together in makeup and we believe the memory of those times would not be enhanced,” the band said in a statement. “To bring this to a quick end, we have decided not to play in any line-up, and we will focus our attention on celebrating our induction into the Rock and Roll Hall Of Fame.” Stanley added in Rolling Stone: “I don’t need the Hall of Fame. And if there’s not reciprocity, I’m not interested. The Red Hot Chili Peppers, practically every member was inducted, and virtually all 175 members of the Grateful Dead. Rules need to apply to everybody.” Frehley, now 62 and living in San Diego said: “The reason they don’t want to perform with me and Peter is because the last time they did, they had to do a reunion tour. We play three songs, the fans go crazy. They don’t want to open up a can of worms.”   Photo: Fin Costello/Redferns

Chris Martin, Bruce Springsteen Sub for Bono With U2