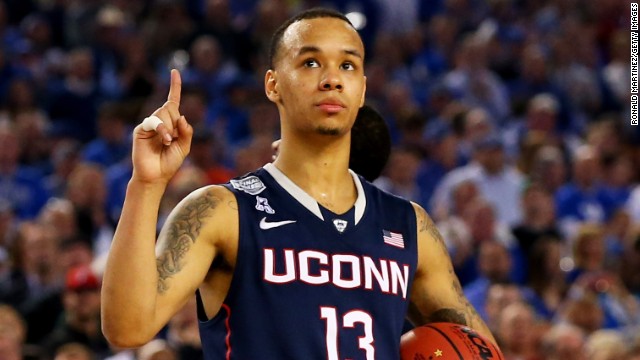 ARLINGTON, Texas — Of all the great point guards in the history of the UConn program, Shabazz Napier now stands apart. With his Most Outstanding Player performance in UConn’s 60-54 victory over Kentucky at AT&T Stadium, Napier now has two NCAA championship rings, one more than Khalid El-Amin, Taliek Brown and yes, even the great Kemba Walker, too. They were the point guards on UConn’s three previous championship teams in 1999, 2004 and 2011. Napier is one of the shortest players in UConn history, but he stands tall now and casts a huge shadow for future guards. He and fellow guard Ryan Boatright badly outplayed the younger Harrison twins, combining for 36 points, 10 rebounds and 6 assists to the Harrisons’ 15 points, 9 rebounds and 5 assists. Not only did Napier win two championships three years apart, he did it one year after the NCAA banned UConn from the postseason for APR issues. “You’re looking at the hungry Huskies,” he told the crowd after putting up 22 points, 6 rebounds, 3 assists and 3 steals in his final college game. “This is what happens when you ban us.” On the podium, Napier expanded on this comment, saying he had planned to say that because he “knew” UConn would emerge victorious. “We hungry,” he said. “When you prevent us from trying to go to the post-season, and it wasn’t our fault, we worked since that day on. Coach [Kevin] Ollie told us, this is going to be a two-year plan, and since that day on we believed… “I’m being real humble and not trying to be cocky, when you believe something so much, you understand what may happen in certain situations. I told myself, if I was on that podium I was going to say that.” The only other players in UConn history with two rings are Napier’s fellow seniors, Niels Giffey and Tyler Olander, who also won in 2011. “[Napier’s] always going to have a home here,” Ollie said. “He got two National Championships, can’t nobody say that in our history. Niels Giffey, Tyler Olander got two national championships. Can’t nobody say that in our history.” Said former UConn coach Jim Calhoun: “Clearly when you talk about Ray [Allen], when you talk about Ben [Gordon], ‘Mek [Emeka Okafor], Kemba, Rudy [Gay], you’re going to say without question Shabazz, too. So he’s right there with the great ones we’ve ever had certainly. Two rings special.” Said former UConn star Rip Hamilton: “This puts him [Napier] right up there with all the great guards that came through the University. We have a legacy of producing great guards and showing up at the right time and he displayed it again.” Said UConn’s Lasan Kromah: “Shabazz is an unbelievable player. He’s the best player I’ve ever had to guard in practice. He’s the best player I’ve ever seen on the floor. He can take his future as far as he wants, I’m real proud of him. One NBA executive told SNY.tv that Napier projects to 25-40 in the NBA Draft. DraftExpress.com projects Napier to go in the second round. “If you think about his progression from his sophomore year to now, if he makes that same ascension as a rookie then the sky’s the limit for him,” said Allen, a two-time NBA champ. “For a long time, a lot was made of size and we’ve seen players come into the league  and break that stereotype and his heart is going to be judged more than anything.” Asked if Napier could start in the NBA, Allen said, “I would assume so but it all depends on what team you get drafted to.” Hamilton concurred that Napier could start in the NBA. “Definitely, the way he controls the game, the way he handles the ball, even though he’s about 6-1, he controls the game,” Hamilton said. “Can’t nobody steal the ball from him. He makes big shots, he makes big plays and as a point guard you want your point guard to lead and he does a great jog doing that. Of Napier’s UConn career, Allen said, “He’s set a bar  that generations after him will continue to see and will aspire to.” For now, Napier has left a mark on the UConn program that sets him apart from every other guard before him — even Kemba Walker.