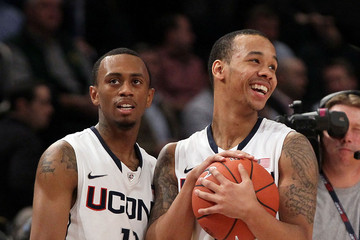 ARLINGTON, Texas — Kentucky has seven McDonald’s All-Americans on its roster. UConn has none. Kentucky has seven projected NBA players. UConn has two. But Shabazz Napier and Ryan Boatright aren’t phased one bit. “Yeah, they’re All-Americans and they’re supposed to be future pros,” Boatright said here Sunday. “We don’t really look into that. It’s another game. “They got to lace their shoes up just like we got to.” Kentucky opened as a 2.5- to 3-point favorite over UConn, but other numbers favor the Huskies. UConn is 3-1 all-time against Kentucky. Kentucky has won 11 straight NCAA Tournament games, but their last loss was against the Kemba Walker-led UConn team in the 2011 Final Four. Current Huskies Napier, Niels Giffey and Tyler Olander were all on that team, and are shooting for their second NCAA title in three years. “We all play the game of basketball to compete against the best,” Napier said. “This is one of them games. At the end of the day, they’re going to throw the ball up in the air. They don’t do nothing different. We put on our jerseys the same way. “They worked hard to get to this point and we did, too. We’re going to try to do our best to try to get this W.”