[youtube=http://www.youtube.com/watch?v=CzQDROBqyQM&w=560&h=315] ARLINGTON, Texas — In the moments after Aaron Harrison took — and made — the biggest shot of his life, Kentucky coach John Calipari motioned for the freshman to go visit his parents courtside. Marian and Aaron Harrison Sr. hugged their son after his clutch 3-pointer with 5.7 seconds remaining ended up being the difference — again — as Kentucky advanced to the NCAA championship game for the second time in three years with a thrilling 74-73 victory over Wisconsin at AT&T Stadium. “This is what he does,” Aaron Harrison Sr. said courtside. “He’s done this his entire life. I knew when he got it, he was going to take it.” After the shot, the father proudly held up his index finger and said “One more.” Yes, Kentucky, which started off as the preseason No. 1 amid talk of a potential 40-0 season only to fall out of the poll after stumbling late in the year, will play UConn for the school’s ninth national championship on Monday night. Either the Wildcats will win their second title in three years under Calipari or UConn will win its second title in four. Kentucky will be the first team to start five freshmen in the national championship game since Michigan’s Fab 5 in 1992. And once again they have Aaron Harrison to thank. 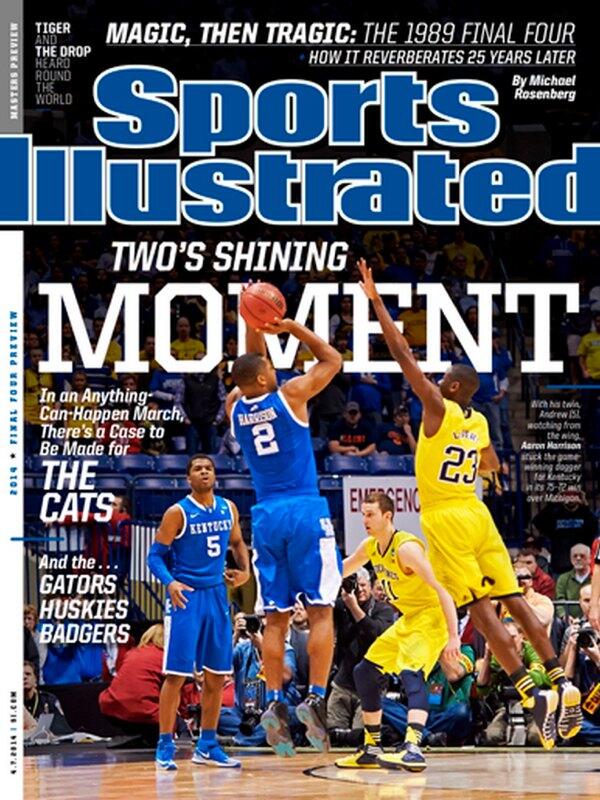 So much for that SI cover jink, huh? (Even if Aaron only appeared on a Regional SI issue.) Wisconsin had made 17 straight free throws before Traevon Jackson missed the first of three with 16.4 seconds left. He made the next two to give Wisconsin a 73-71 lead. Kentucky then drew up a play for Andrew Harrison to dribble down and eventually pass it off to his brother in the corner “but it didn’t work out that way,” Aaron said. “Andrew had to pass it to Dakari [Johnson] and he had to get it back and I just called for the ball and I just made some space and knocked it down,” Aaron said in the corner of the Kentucky locker room. Harrison pulled up over Josh Gasser and drained the shot, sending his teammates and Big Blue Nation into a euphoric state. “His brother was smart enough to say, “I think I’m giving it to you,'” Calipari said. “It was an NBA 3.” “You can’t be scared to miss and you want to be the guy that takes that big shot,” Aaron said. “Guys that make game-winners are not afraid to miss them and he’s not afraid to miss,” Calipari said. Wisconsin had one more chance but Jackson’s shot was off the mark and Kentucky celebrated its trip to the championship game by jumping all over one another at midcourt. The Harrisons combined to go 7-for-22 from the field in the game, but Aaron hit the biggest shot of his life. Again. Harrison previously hit a 3 from the corner to give Kentucky the lead in the final minute against No. 4 Louisville in the Sweet 16 and then killed No. 2 Michigan 48 hours later with a 3 to send the Cats to the Final Four. “I think the Michigan one was probably a little harder,” Aaron said. “I think there was more of a hand in my face in the Michigan one but they were both really tough shots.” This one was pretty big, too. “It was a great shot,” Wisconsin’s Sam Dekker said. “Aaron has been doing that all tournament. He’s got that clutch gene. And props to him for hitting that shot. You got to tip your cap when credit is due. He came through big for his team and put them ahead.” And now, as Aaron Harrison Sr. said, Kentucky only needs “One more.”

After Calhoun Told Daniels To be a 'Son of a Bitch,' He Leads UConn into NCAA Championship Game, Boosts NBA Draft Stock