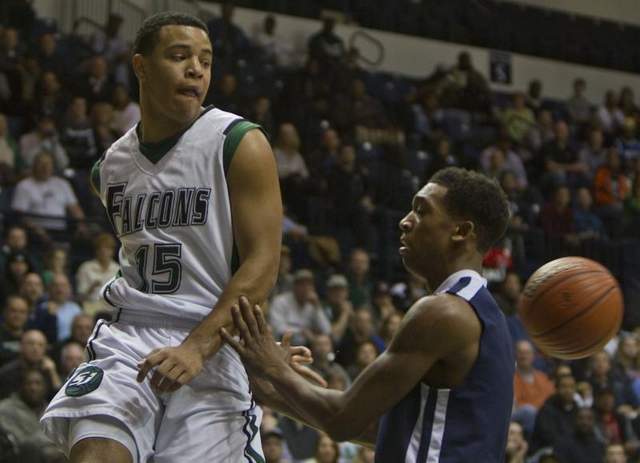 Fairleigh Dickinson beat both Rutgers and Seton Hall last season, and head coach Greg Herenda clearly has the program on the upswing. On Friday, FDU scored a player from New Jersey’s winningest high school program when Marques Townes of Tournament of Champions winner St. Joe’s-Metuchen pledged to FDU. Herenda and assistant Bruce Hamburger were at the TOC final last month, when Townes went for 11 points as St. Joe’s edged Newark East Side, 49-47. “The FDU staff was real great and welcomed me with open arms,” Townes told SNY.tv. “They wanted me there and I want to go to a place where I’m wanted and I’ll be able to have a lot of playing time as a freshman.” The 6-foot-3, 210-pound Townes averaged 16.2 points this season and ended his career with 1,863 points. He also had offers from St Peter’s, South Alabama, Hartford and Charleston Southern. He becomes the fourth St. Joe’s player to pledge D-1 following Kentucky-bound Karl-Anthony Towns, Vanderbilt commit Wade Baldwin and Canisius commit Raven Owen. Townes is also the sixth member of the Sports U AAU program to commit to a D-1 school this year, joining Towns, Baldwin, Quadri Moore (Cincinnati), Jared Nickens (Maryland) and Kenny Grant (Rider). “I will just try to come in and be a scorer like I was at St Joes,” he said. “That’s why they brought me in. They know I could have a chance to make things happen with the team we are going to have next year so I’m going to try to do my best to fit in.” Townes is FDU’s fourth commit, following Devine Eke of Union Catholic, Terrell Bagley of The Robinson School and Darian Anderson of St. John’s in Washington, D.C.. “Marques I believe will have a great career at FDU and be an All-NEC player,” St. Joe’s coach Dave Turco told SNY.tv. “The coaching staff at FDU did a great job in the process and I believe got themselves a steal. I truly believe that Marques will be a very solid college player. He has a knack for scoring. That is something that you just can’t teach. “He attacks the rim and can finish with contact. His outside shot has improved each season and he is now shooting the 3-ball at a very high percentage. He was able to carry us at times and always seemed to play his best when we needed it the most. He is one of the hardest working kids that I have ever coached and is such a great teammate. FDU will be better off just for him being part of their program. I am excited to see him play as well as see what a great job the FDU staff is doing keeping Jersey players home.” Photo: MyCentralJersey.com