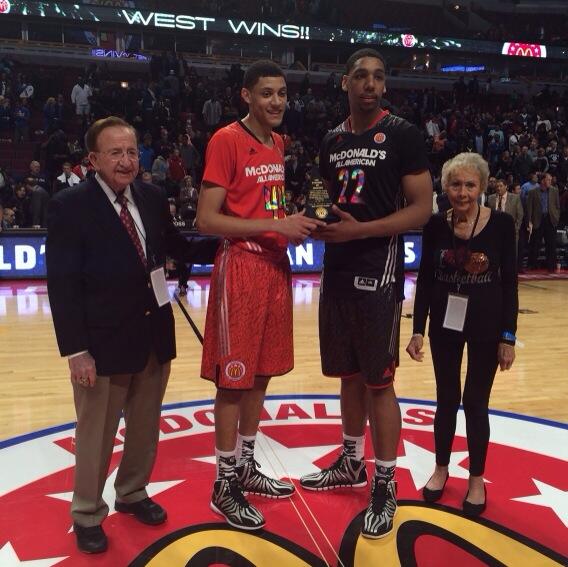 Jahlil Okafor had a crucial dunk in the final seconds en route to  the John R. Wooden MVP award as the West All-Stars edged the East All-Stars, 105-102, in the McDonald’s All-American Game at Chicago’s United Center. The Duke pledged slammed home a dunk to give the West a 103-102 lead and finished with 17 points and 7 rebounds in the game played in his hometown. Kansas-bound Kelly Oubre Jr. (11 points) added two free throws to add to the West’s total, and Indiana commit James Blackmon Jr. missed an off-balance 3-pointer for the East in the final seconds. SMU-bound guard Emmanuel Mudiay added 15 points and 6 assists for the West, while UNLV pledge Rashad Vaughn had 14 points and 5 rebounds. North Carolina commit Justin Jackson went for 23 points and 5 rebounds and was named the MVP for the East. Duke pledge Tyus Jones added 7 points and 9 assists in the loss, while Kansas-bound big man Cliff Alexander had 9 points and 11 rebounds. Mudiay drew praise Wednesday both from ESPN analyst Jalen Rose and SMU coach Larry Brown, whose team meets Minnesota Thursday in the NIT final at Madison Square Garden. “If he’s not the best player in this class, he’s definitely gonna be the best guard,” Rose said on air of Mudiay. “He gives us a chance to be great,” Brown said earlier on a conference call. As for Okafor, he is hoping to play next year with Jabari Parker, whose father told SNY.tv this week his son is undecided about entering the NBA Draft. “No clue, no idea at all,” Okafor said when asked if he knew what Parker would end up doing. Photo: Andrew Nelles