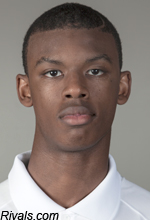 Franklin Howard, a 6-foot-4 2015 shooting guard from Fairfax (Va.) Paul VI and Team Takeover, announced on Twitter he will name his college on his 17th birthday, April 14. Howard is considering Maryland, Georgetown, Ohio State, Virginia, Syracuse, and N.C. State. He missed this past season after undergoing ACL surgery last summer. “Frank is on his way to full recovery from ACL last July,” Paul VI coach Glen Farello told SNY.tv. “Frank’s got the combination of skill, IQ and competitiveness that coaches appreciate. The kid is a winner. And he will be even more hungry coming back. He will end up being a combo guard. He has a great pace to his game.”