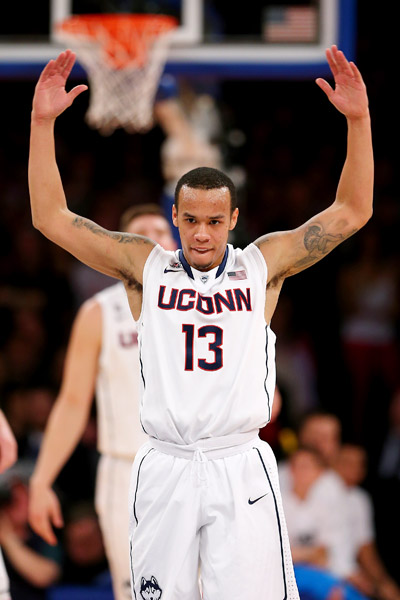 By JOSH NEWMAN Special to ZAGSBLOG NEW YORK – Shabazz Napier wanted no part of last season’s NCAA Tournament and with good reason. The University of Connecticut senior guard and his teammates were banned from all postseason play in 2012-13 thanks to poor Academic Progress Report (APR) scores. That meant neither the NCAA Tournament, nor the final Big East Tournament were part of the Huskies’ March plans. So, with Napier in Storrs instead of a neutral NCAA Tournament site last season, what did he do to bide his time? “To be honest, I didn’t watch, not one game,” Napier said on the eve of Connecticut’s East Regional semifinal against Iowa St. on Friday evening at Madison Square Garden. “I was more into watching ‘River Monsters’ and stuff like that. I didn’t want to watch because I felt like if I did, I would be aggravated. I just really watched certain TV shows and like I said, I didn’t want to watch.” The APR sanctions and lack of a postseason led to the defections of senior forward Alex Oriakhi, redshirt freshman Michael Bradley and junior Roscoe Smith. Led by Napier, the players that pulled through last season now look smart for sticking around. The seventh-seeded Huskies emerged from the Buffalo sub-regional last weekend with an 89-81 win over St. Joseph’s and an impressive 77-65 victory over one-time Big East-foe Villanova to get to MSG. In the round of 32 against the second-seeded Wildcats, Napier looked every bit the part of senior leader, finishing with a game-high 25 points on 9-for-13 shooting in just 25 minutes. Napier may have gotten the shine that night, but he wasn’t alone. He sat for a time late in the game with a bruised shin, so junior guard Ryan Boatright helped with ball-handling duties, while former South Shore star Terrance Samuel stepped up with a career-high 11 points, including a 7-for-8 showing at the free throw line. “The hard work they did to get our school through the downtime, when everybody was saying the school and the program would not make it, those kids dug their heels in and said, ‘Yeah, we are gonna make it,'” Ollie said. “They were loyal to the program and you reap the benefits when you do that.” “I really appreciate them, my support staff, my coaches, my AD, my president for believing in us that we were gonna make it through.” A freshman reserve on UConn’s Kemba Walker-fueled national title team in 2011, Napier has hammered home the point this season that he is among the country’s premier big-game performers. The 25 points against Villanova came two days after he put 24 points, eight rebounds and six assists on the Hawks in the second round. His 17.8 points, 5.9 rebounds and 4.9 assists led to his being named the inaugural American Athletic Conference Player of the Year, in addition to his being finalist for several national awards. With a season like he’s had, there is little doubt he will be ready for the bright lights of Madison Square Garden, which is hosting NCAA Tournament games this weekend for the first time since 1961 in what is expected to pro-UConn crowd. “I know Shabazz is ready, he’s been ready the whole season,” Ollie said. “He was ready last year when we couldn’t go to the NCAA Tournament. He’s not scared. That’s not to say he’s going to have this great game, but he’s going to do whatever it takes for us to win. That’s rebound, that’s being a facilitator and getting 10 assists, that’s what he’s gonna do.” “He’s not scared of this moment and we’re not scared of this moment.” Follow Josh Newman on Twitter

Tyler Ennis to the NBA Draft