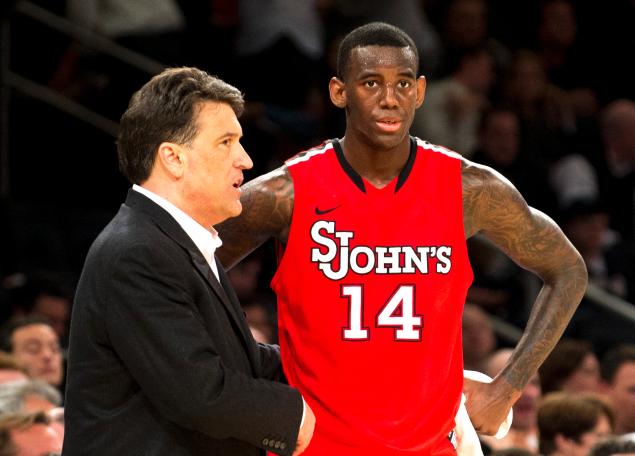 Despite not being listed on the DraftExpress.com 2014 Mock Draft, 6-foot-9 St. John’s sophomore forward JaKarr Sampson announced Monday that he intends to forego the remainder of his collegiate career and enter the 2014 NBA Draft. St. John’s will hold an 11 a.m. press conference on Tuesday. “JaKarr will forego his final two years of eligibility and pursue his dream of playing in the NBA. We are grateful for JaKarr’s contributions to our St. John’s basketball program,” said Red Storm head coach Steve Lavin. “In speaking with NBA general managers JaKarr is projected as a draft prospect with intriguing talent and upside.” “It has been my lifelong dream to play in the NBA, and I am excited and ready to begin that journey,” said Sampson, the 2012-13 Big East Rookie of the Year. “I am grateful to my teammates and coaches at St. John’s. I would like to thank Coach Lavin, our staff and my teammates for being there for me throughout my whole career at SJU. We have been through a lot together and I know everyone is excited for me. Coach Lavin and my support group have helped me conduct research and the information gathered indicates that with hard work, I have a chance to improve my stock and play in the NBA next year. I will work hard and prove myself in every workout. I know I can impress upon GMs and coaches that I am ready be a contributor to a NBA team.” Sampson is saying he “is projected to possibly be selected between the draft’s late first and mid-second rounds,” but one veteran NBA scout thinks it’s a “poor decision.” “He is not close to the talent of a Moe Harkless when he came out,” the scout told SNY.tv. “If he is satisfied being a second-round pick then I guess he feels he is making the right decision. Great athlete with no idea how to play.” Said a second NBA scout: “Very talented, athletic, would like him to stay another year and get stronger and improve his offensive skill set. Some teams have him on their board as a second-round guy.” Harkless was the No. 15 pick in 2012. Sampson has not hired an agent at this time but is in the process. The early-entry deadline is April 27 and the 2014 NBA Draft will be held on June 26 at Barclays Center in Brooklyn. ​ A total of 14 players signed or coached by Lavin have become NBA draft choices. Baron Davis, a 1999 lottery pick, is a two-time NBA All-Star who played in his 13th season in 2011-12. Earl Watson, a 2001 draft choice, is now a 14-year NBA veteran. Harkless was Lavin’s first draft selection at St. John’s – the first for the Red Storm since 2001 and the first in the NBA’s First Round since 2000. Harkless was selected by Philadelphia and later traded to Orlando. “We thank JaKarr for his contributions to our men’s basketball program,” said St. John’s Director of Athletics Chris Monasch. “JaKarr will always be a member of the St. John’s Family and be welcome to return finish his degree.” “My mother and I want me to finish school,” said Sampson. “I will work with my professors and [St. John’s Student Development coordinator] Eric Rienecker to complete the semester in good standing and will look to come back during my offseasons and finish my degree in liberal studies.”