Barkley Says Freshmen Stars Will ‘Struggle’ in the NBA 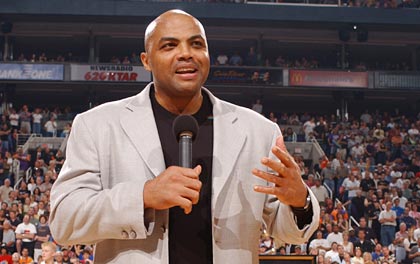 Charles Barkley has long been against freshmen entering the NBA, and he used this weekend’s stunning results to chime in again. The three projected top picks  in the NBA Draft — Andrew Wiggins, Joel Embiid and Jabari Parker — are now all out on the first weekend of the NCAA Tournament, with Kansas having been sent packing by Stanford on Sunday as Wiggins went 1-for-6 for 4 points and Duke having been ousted by Mercer on Friday. Syracuse and freshman star Tyler Ennis, a projected Top 10 pick, also lost to Dayton on Saturday night. “I want these kids to stay in school longer because the NBA is as worse as it’s ever been,” Barkley said on CBS. “It’s not good basketball. It’s frustrating for me to watch. These kids aren’t physically or emotionally ready to come and play against grown men. “You look at the last two days. We’ve had on paper Jabari Parker and Andrew Wiggins, they’re supposed to be 1-2, 3 at the latest, they didn’t have very good games. And it’s just one game but if they’re going to struggle against Mercer and Stanford, they’re really going to struggle against grown men. “You look at the greatest players who ever played basketball, it didn’t hurt Magic Johnson to stay two years, it didn’t hurt Michael Jordan to stay three years. And people’s analogy is what about Kobe and what about LeBron? Those guys are exceptions. Those are two of the 10 greatest players ever. So let’s don’t base all our arguments on those guys. Kevin Garnett is also in that group. “I just wish these guys would stay in school. I think there’s a big difference between staying in school for 30 games or staying in college for two years, which I would like for these guys to stay at least two years.” Barkley’s comments echo those of Syracuse coach Jim Boeheim — who told SNY.tv in December that none of the frosh were “transcendent” players. Jerry West has called this year’s draft class “poor,” which might be strong but is also a defendable position at this point.