http://web.sny.tv/media/video.jsp?content_id=31607067 BUFFALO — Anybody who’s watched Syracuse over the course of this season knows that a confident and effective Trevor Cooney can mean the difference between winning and losing. It’s probably no coincidence that Cooney’s late-season struggles coincided with the Orange losing five of their final seven games. Since draining 11-of-15 shots for 33 points in a win over Notre Dame on Feb. 3, Cooney hadn’t made more than four field goals in a game. The Orange went 5-5 during that span. In starting the season 25-0, Cooney made four or more field goals 15 times. So it was a good sign for Syracuse’s postseason hopes when Cooney went 5-for-10, including 4-for-8 from deep, en route to 18 points as No. 3 Syracuse crushed No. 14 Western Michigan, 77-53, in a second-round South Region game on Thursday. “It wasn’t coming out here, ‘Oh, let’s make shots,'” Cooney said in the Syracuse locker room. “It was just coming out here and being high-energized and getting the guys going and being a good leader, and when you do stuff like that good things happen.” Cooney missed his first 3-point attempt and then drained one to turn a 7-4 game into a 10-4 one. “It just makes our team different when it’s 7-4 and he shoots and it goes in,” Syracuse coach Jim Boeheim said. “He shoots and he misses, it’s 7-4 and they can come down and get it within one.” When Cooney is hitting, it opens up driving lanes for his teammates, who all benefited. Jerami Grant and Tyler Ennis scored 16 points apiece and C.J. Fair had 14. “When he knocked down a couple, it stretches you out,” Western Michigan coach Steve Hawkins said. “You always have to account for him when he’s out on the floor, no matter where he is.” Said Ennis: “Trevor, when he’s hitting shots, I think it opens it up for Jerami, myself, C.J. We gotta find ways to get him easier shots and today was a result of getting him open. When he’s open he’s gonna make shots.” Syracuse gets a tough Dayton team on Saturday, and if they are to get past the Flyers and make a run here, they need Cooney to remain confident and keep shooting. “That’s what you have to do,” Boeheim said. “If you’re a shooter, you’ve got to be aggressive.” ROBERSON GETS FIRST TASTE OF NCAA TOURNAMENT 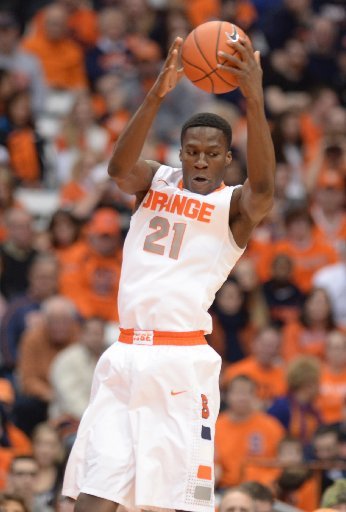 A year ago at this time, Tyler Roberson was leading Roselle (N.J.) Catholic to the New Jersey Tournament of Champions title. On Thursday he got his first taste of the NCAA Tournament, notching 3 points and 3 rebounds in 9 minutes. “It felt good to just get out there and play some, it was exciting,” the 6-8 Roberson told SNY.tv. “It felt like there was a lot of energy in the building.” Roberson looked comfortable in the paint, and point guard Tyler Ennis said he worked hard to get ready, not knowing how many minutes he might play. “I mean, Rob’ he had a really good week at practice,” Ennis said. “We were kind of simulating him getting the ball in the high post and he was really working there. I think that’s where he’s comfortable. It was good to see what he could do out there.” Syracuse coach Jim Boeheim played only seven guys early before opening it up in the blowout and letting Roberson and the other bench guys play. “I was pretty anxious on the bench and I knew sooner or later I would get in,” Roberson said. “It happened and I just went in and play hard.” He added: “I’m trying to show him that I can play and if he decides to put me in in any tournament games going forward, then I’ll be happy with that. But I tried to go out there and show him some things.” Meantime, Roberson has half an eye on Roselle Catholic, which played Thursday night in the TOC semis against Newark East Side. “I think they’ll win though,” he said. If Syracuse is able to get to a Final Four or compete for a title this year, Roberson could potentially win two championships two years running. “That would be like a dream come true,” Roberson said. “That would just be amazing. That would be something that not a lot of people get to do, so I would be excited about it.” Photo: Rich Barnes-USA TODAY Sports Follow Adam Zagoria on Twitter