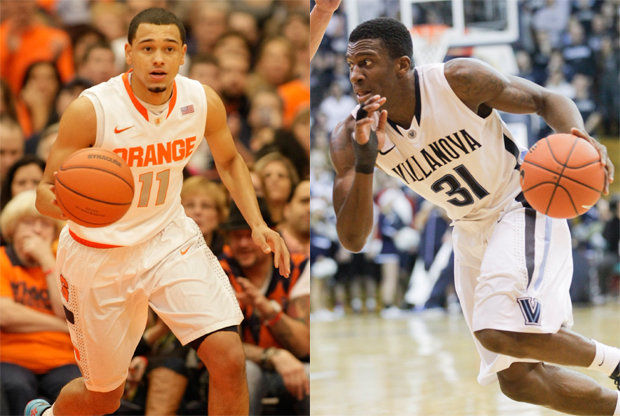 Tony McIntyre says his luck is running so strong right now that his friends joke he should buy a lottery ticket. McIntyre will have not one, but two sons playing in the NCAA Tournament. And as luck would have it, Tyler and Dylan Ennis will both compete in Buffalo this weekend — making for a nice, easy trip South of the Canadian border for the 50 or 60 friends and family expected at HSBC Arena. “I don’t think there’s too many times that you can actually have two sons playing college basketball, two sons that make it to March Madness and also play in the exact same gym,” McIntyre told SNY.tv. “It’s pretty crazy.” Tyler Ennis and Syracuse are the No. 3 seed in the South and will face No. 15 Western Michigan at 2:45 on Thursday, while Dylan Ennis and Villanova are the No. 2 seed in the East and face No. 15 Wisconsin-Milwaukee at 9:25.

“I kind of had a feeling they’d put Syracuse in Buffalo, I was worried about where they’d put Villanova,” McIntyre said. “I was hoping they didn’t have to go to Anaheim or somewhere like that where you’re way out there and you’d have to figure out plane tickets for the next round and the next round.” McIntyre said the Buffalo twofer makes up for this past week where he and his wife, Suzette Ennis, split up and each saw one son lose in the first round of their conference tournament. Syracuse was stunned by N.C. State in the ACC quarterfinals in Greensboro, N.C., and Villanova was knocked off by Seton Hall in the Big East quarters in New York. “It makes up for my wife sitting in New York for no reason and me sitting in North Carolina for no reason,” he said. McIntyre plans to make the 1 hour, 20 minute drive from Toronto down the QEW highway on Wednesday and has several hotel rooms booked in Buffalo. He expects 50-60 family and friends to join the fun. “A lot of people bought tickets early and then everyone’s trying to go get tickets now,” he said. “There’s probably going to be close to 50-60 with family, friends and people close to our family.” The Ennis brothers squared off earlier this year when Syracuse beat Villanova at the Carrier Dome in a non-conference game, and McIntyre said it will be “comforting for them” to play so close to home in Toronto. “It’s comforting for them knowing that they’ll have their whole family there because for most games this year we’ve been split up where one was at one game and one was at another and now they get the opportunity to play in front of all their family and friends all in the same location,” he said. All told, there are 25 Canadians in the NCAA Tournament, with 20 of them having connections to McIntyre and the CIA Bounce program, he said. “I think it’s definitely growing,” he said. “These guys are major contributors to teams that make the tournament. It’s pretty special to take a look at this list and see all these kids that are going to be competing.’ After a 25-0 start, Syracuse has lost five of seven, but McIntyre says Tyler Ennis, a projected lottery pick, is raring to go for the Big Dance. “I think they all are,” he said. I think they’re at the point where it’s do-or-die now. They’re going to  lay it on the line and go for a good little run here.” Andrew Wiggins, the projected No. 1 pick out of Kansas, and his brother Nick Wiggins of Wichita State — fellow Canadians — are also both starting the tournament together in St. Louis. If Syracuse and Kansas both win their first two games, Ennis could face Andrew Wiggins — his former CIA Bounce teammate — in the Sweet 16 in Memphis. “I think it would be great,” McIntyre said. “At that point’s it’s old teammates get to come up against each other for the first time of the year. I think it would be fun to watch.”    CANADIANS IN THE BIG DANCE (Per Tony McIntyre) Dyshawn Pierre – Dayton Tyler Ennis – Syracuse Andrew Wiggins – Kansas Agunwa Okolie – Harvard Melvin Ejim – Iowa State Naz Long – Iowa State Dylan Ennis – Villanova Kenny Cherry – Baylor Brady Heslip – Baylor Jahenns Manigat – Creighton Jason Caliste – Oregon Nick Wiggins – Wichita State Chadrack Lufile – Wichita State Justin Edwards – Kansas State Grandy Glaze – St Louis Nik Stauskas – Michigan Sim Bhullar – New Mexico State Tanveer Bhullar – New Mexico State Daniel Mullings – New Mexico State Laurent Rivard – Harvard Stefan Nastic – Stanford Dwight Powell – Stanford Kevin Pangos – Ganzaga Kyle Wiltjer – Gonzaga Jordan Bachinski – Arizona State