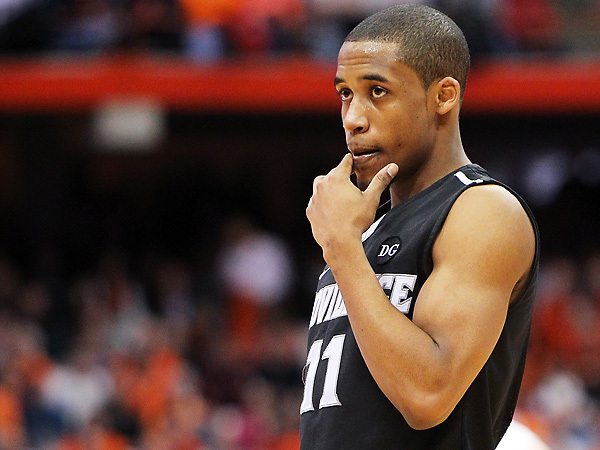 By JOSH NEWMAN Special to ZAGSBLOG NEW YORK – Providence is through to the Big East Tournament final thanks to an 80-74 decision over Seton Hall on Friday evening. The fact that these Friars have advanced to Saturday night at Madison Square Garden is somewhat remarkable. This season started with much promise as sophomore guard Kris Dunn returned from shoulder problems that plagued him as a freshman. The 4-star freshman tandem of Brandon Austin and Rodney Bullock was also expected to add to an already-formidable lineup, which included Bryce Cotton, Kadeem Batts, LaDontae Henton and Long Island native Tyler Harris Dunn’s shoulder trouble persisted, costing him all but four games this season, while Austin and Bullock never played a game for head coach Ed Cooley after being suspended indefinitely for disciplinary reasons in early November. Compounding all of those issues was the fact that Ricky Ledo left Providence after his freshman season for the NBA Draft. A one-time 5-star recruit and a cornerstone of Cooley’s efforts to bring the program back to prominence, Ledo never played a game for the Friars after being ruled academically ineligible. “We started 0-2 (in Big East-play), we had a devastating, devastating loss in Kris Dunn,” Cooley said. “We had a couple of suspensions, we were sick, I was sick, so this was an accomplishment because our mission is close to being achieved.” The defection of Ledo, the loss of Dunn and the dismissal of Austin and Bullock were the major early story lines at Providence. All the while, Cotton morphed into one of the new Big East’s most dynamic offensive weapons, and Henton and Batts became reliable, veteran complementary pieces. Cooley has asked a lot of those guys, who are part of a lineup that plays heavy minutes while going only six-deep. Cotton came into Friday night averaging an absurd 39.9 minutes per game and Henton came in at 37.0 minutes per game, while three other players average at least 30.9. That tactic has not failed Providence yet. The Friars got to 22-11 with Friday night’s win and after coming to New York this week on the bubble, appear to be locked into an NCAA Tournament spot even if they were to lose on Saturday night. “We’re led by our seniors and our upper class, starting with Bryce, Kadeem and LaDontae,” Cooley said. “They’ve been through a lot of Big East wars and they’ve been through a lot of games. They’ve logged a lot of minutes. What I’m more proud of is how they’ve handled themselves and how much they’ve grown.” Cotton has had a bit of a tough time offensively in this Big East Tournament, but on Friday, Henton was the player that Seton Hall had no answer for.The junior forward’s 26 points on 9-for-13 shooting and 14 rebounds led three Friars in double-figures as Cotton had 18 and Harris 17. “LaDonate was a man-child today,” Cooley said. “An absolute man-child.” Henton, who averaged 17.0 points and 9.7 rebounds in three games against Seton Hall this season, Cotton and sophomore guard Josh Fortune all played 40 minutes on Friday night. When Providence takes the floor Saturday night looking for its first Big East Tournament crown in 20 years, it’s a safe bet all three with play 40 minutes, or at least close to it. “You can’t be tired when you’re playing for a championship,” Cooley said. “You can be tired at the end of the season when you’re on vacation. Follow Josh Newman on Twitter

Wiggins Back at No. 1 on DraftExpress.com

After Journey From the Alabama Projects to Seton Hall, Fuquan Edwin's Career Comes to a Close