ACC Tournament at Barclays Center Would be a Home Run 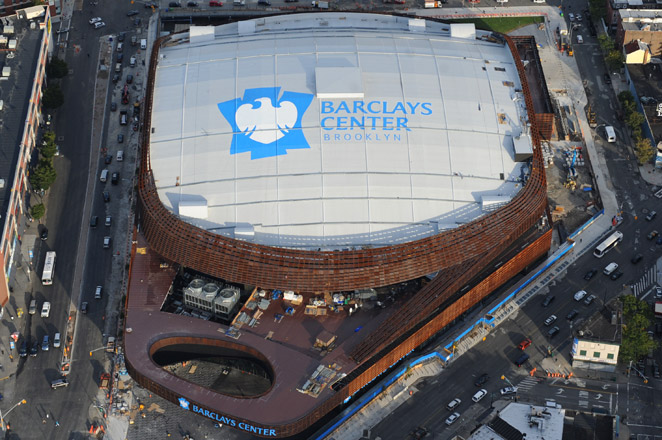 Having the ACC Tournament at Barclays Center beginning in 2017 would be a home run for the league. So says everybody from Jim Boeheim to Rick Pitino to Coach K to Roy Williams to Jay Bilas. “I think it would be a great marriage because the best of the ACC and the Big East would be in New York,” Bilas told SNY.tv by phone Friday morning. “It helps everybody. It would be the hottest ticket in basketball. I think it would be a huge win.” Pete Thamel of SI.com reported Friday morning that the ACC Tournament is “finalizing” a two-year deal at the Barclays Center beginning in 2017 after the event is played in Greensboro, N.C. in 2015 and Washington, D.C. in 2016. The Atlantic 10’s deal with Barclays ends in 2017, so the arena would have to navigate that year if both tournaments are set to play there. “I happen to think if you had a Final Four up there on a Friday night — if you had a Saturday championship game — of Duke, Louisville, Carolina and Syracuse, or put Pittsburgh or Notre Dame or whoever, and you put those top teams in the semifinals, that would rival anything in college basketball,” Bilas said. You can bet it would make Syracuse coach Jim Boeheim and Louisville coach Rick Pitino happy, too. Both advocated for the ACC Tournament coming to New York last year. Duke coach Mike Krzyzewski and North Carolina coach Roy Williams also told SNY.tv last summer they’d be in favor of having the ACC Tournament in New York. “We have New York, we should use it,” Coach K told SNY.tv at the Peach Jam. “If we don’t use it, we’re foolish. We use [Madison Square Garden] at Duke, we come there every year.” “It’s really, really hard for me to give up on Greensboro (N.C.), but boy having the ACC Tournament in New York would really be something special,” Williams told SNY.tv. Bilas said before he started covering the Big East Tournament he always thought the ACC Tournament was the best event in college basketball. “But the Big East Tournament was better,” he said. “One of the reasons it was better was the stage it was on and being at the Garden. You put this product on that stage and I think it will be a springboard into heights the ACC hasn’t seen in a while.” Obviously, such a move could draw fans away from the Big East Tournament, which has a contract with Madison Square Garden through 2026. The new Big East is now operating without Syracuse, UConn, Louisville, Pittsburgh and Notre Dame. Tonight’s semifinals feature Seton Hall against Providence and Creighton against Xavier. “Well, the Big East doesn’t exist anymore,” Bilas said. “I know there’s a name out there. The Big East name exists, but the Big East doesn’t exist. Once Syracuse, UConn, Louisville, Pittsburgh, Notre Dame, once they’re broken up there is no more Big East. It’s just a name now. And they’re going to have to establish a new brand and something behind that name because what was behind the name Big East does not exist anymore. “And that’s why the ACC probably came out the big winner in this by getting those brands. You can just tell by the TV ratings. People were compelled by Syracuse-Duke, Syracuse-Virginia, those were some of the highest-rated games of the year. At least half of the highest-rated games of the year came out of the ACC this year. And this wasn’t the ACC’s strongest year. It’s got better coming.” And now it appears to be coming to New York. Photo: Daily News via Getty Images