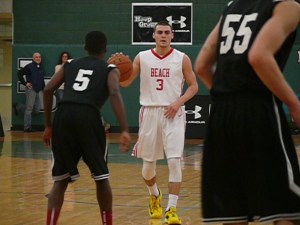 After receiving an offer from Notre Dame and head coach Mike Brey less than a week ago,  sources have confirmed to SNY.tv that Matt Farrell has officially committed to Notre Dame. The 6-foot-1 Farrell out of Point Pleasant Beach High School held offers from Fordham, Rutgers, St. Joe’s and Monmouth and interest from Creighton and Providence and Monmouth. He initially committed to fellow ACC member Boston College before re-opening his recruitment in November. “Ever since I was a little kid, it’s been on my mind,” Farrell told Tom Noie of ND Insider. “It’s an opportunity you dream of. The ACC speaks for itself. To do it at a school like Notre Dame, it’s a blessing.” “Matt’s a dynamic point guard that makes everyone around him better,” Point Pleasant Beach coach Nick Catania said. “His work ethic and winning attitude are contagious to those around him. At Notre Dame, he will make the game easier to play for his teammates. He is a winner and always puts winning first.” Notre Dame currently has freshman Demetrius Jackson playing heavy minutes at the point guard position, but he is the only true underclassmen point guard on the roster going into next season. The Irish were looking for additional help at the point and Farrell is a solid late addition. Farrell joins 6-9 power forward Martin Geben (Lithuania/Hagerstown, Md.) and 6-5 swingman Bonzie Colson (New Bedford, Mass.) in Notre Dame’s 2014 class. According to ND Insider, all three incoming players will travel with the Irish to Italy in August. “Oh, my God, talk about perfect timing,” Farrell told Noie. “That’s going to be so special for me.” Follow John on Twitter

Having Danced as a Player & an Assistant, Stevie Mas Now Leads Manhattan to the NCAAs as Head Coach