Boeheim: 'I don't care if ACC Tournament is on the moon' | Zagsblog
Follow @adamzagoria

Boeheim: ‘I don’t care if ACC Tournament is on the moon’ 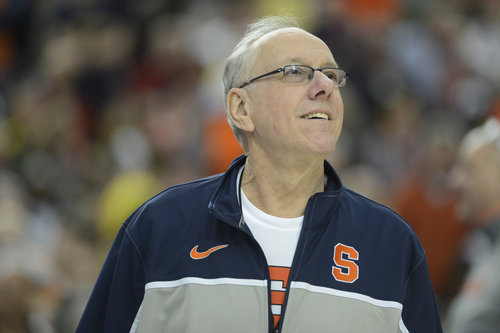 While fellow ACC newcomers Mike Brey and Jamie Dixon seem to be excited about entering their first ACC Tournament, Syracuse coach Jim Boeheim didn’t exactly sound fired up about going down to Greensboro, N.C. later this week “We’re looking forward to the challenge of  the tournament,” Boeheim, whose team is seeded No. 2 and opens play on Friday after a double-bye, said Monday on a conference call. “All that’s important when you play in a tournament is that they have a basketball court and an arena, and they’ve got that in Greensboro so we’re looking forward to the competition there.” Not exactly a ringing endorsement there, Jim. Boeheim, of course, joked with Louisville coach Rick Pitino last season that the two of them would end up eating at Denny’s in Greensboro instead of a fine Italian restaurant in New York. Asked if he would miss a particular restaurant in New York this year, Boeheim said: “I don’t usually go out that much when we go to the tournament, so it’s just a matter of getting there, preparing and playing the games.” Both Boeheim and Pitino — whose club joins the ACC next year — are in favor of bringing the ACC Tournament to Madison Square Garden.  The ACC Tournament is set for Greensboro through 2015 before shifting to Washington, D.C., in 2016. “You know, I don’t care if they play the tournament on the moon,” Boeheim said Sunday, according to the Post-Standard. “As long as they got a basketball court there, we’re going to go play. All the other stuff is just a Northern, not-funny guy trying to make some humorous remarks that people tend to want to take the wrong way. I’m fine with it. I’m fine with the tournament wherever it is. It’s just about the basketball. That’s all it’s about. “Obviously for us, we’re in New York. We’d like to go to New York. It’s right there.”
As for his team’s status at this point, Boeheim said the Orange — losers of four of their final six games after a 25-0 start — weren’t in a slump.
“I don’t think our team’s ever been in a slump,” he said. “I think without Jerami Grant we certainly weren’t as good as we’d like to be. I think we played pretty consistently all year. There’s a couple games where we didn’t shoot as well as we’d like, but every team in the country loses games. Just virtually every team loses two, three games. Sometimes when you’re schedule gets really hard, and that’s what happened to us. Overall,we played consistently well all year.” Brey, a former Duke assistant and native of Rockville, Md., said he grew up as a big fan of the ACC Tournament and recalls listening as a 10th-grader on his transistor radio during school. He said he will miss playing in New York this week but is trying to education his players on the history of the ACC Tournament. “I’m thinking I’m getting on a plane this afternoon and I’m not going to New York City,” Brey said, adding he’ll miss “my little Italian deli around the corner” from the Dumont Hotel. Still, he said he told his players that the ACC Tournament is “twice as old as the Big East Tournament, that’s how long this thing’s been going.” Going in as the No. 13 seed, he said he told his players, “Let’s win our first ACC Tournament game in our first year in the ACC and then let’s go back to the hotel and talk about who we face next.” Pitt’s Dixon, whose No. 5-seeded team faces the Notre Dame/Wake Forest winner in the quarters, sounded somewhere between Brey’s excitement and Boeheim’s indifference. “When you talk about tournaments as far as college basketball, the Big East and the ACC have always been the standard-bearers,” Dixon said. “It’s always been more important than the conference championships. “The tournament’s always had this tradition of being more important in the Big East and it’s the same thing as I’ve seen in the ACC.” As for Boeheim, he doesn’t feel the need to educate his players about the history of the ACC Tournament the way Brey does. “The players know they’re in a big-time tournament,” he said, “a really big-time tournament and that’s really all the education that I think they need.”
ACC TOURNAMENT SCHEDULE (Courtesy Post-Standard)
FIRST ROUND (Wednesday)
SECOND ROUND (Thursday)
QUARTERFINALS (Friday)
SEMIFINALS (Saturday)
FINAL (Sunday)