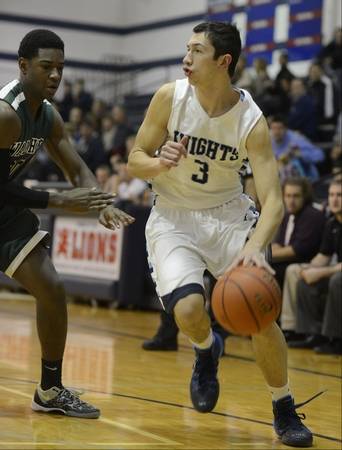 Buffalo coach Bobby Hurley continued to add to his impressive 2014 recruiting class when he landed a verbal pledge Sunday from 6-foot-4 Bobby Frasco out of Prospect High in suburban Chicago. A three-year varsity player who averaged 18.3 points and 7.1 rebounds this season while shooting 40 percent from beyond the arc, Frasco also had offers from Boston University, Central Michigan, Ohio, La Salle and Chicago State. “Coach Hurley, Coach [Nate] Oats and the whole coaching staff made me feel at home,” Frasco said of his weekend unofficial to Buffalo. “In their first year, winning the MAC East is a great accomplishment and that’s what sealed the deal. “Coach Hurley wants me to come in and be a knock-down shooter and a shut-down perimeter defender.” Frasco is Hurley’s fifth pledge in 2014, joining 6-10 center Ikenna Smart, 6-3 shooting guard Mory Diane, 6-2 point guard Lamonte Bearden and 6-9 center Raheem Johnson. “He is a lanky 6-4 knock-down 3-point shooter with deep range,” said his head coach, John Camardella. “He is the son of a Chicago cop and very tough. He also had a great leadership skills and a 29 ACT. We are very proud of him.” Photo: Daily Herald

Wright to be Coach of Year; All-Big East Teams Named