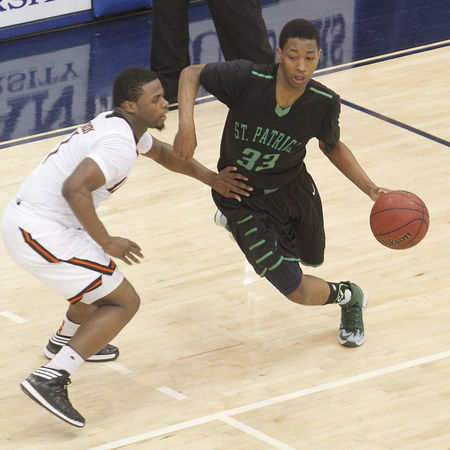 UNION, N.J. — Dupree McBrayer is a New York native who has played high school ball in New York, Las Vegas and now New Jersey. And on Saturday night the uncommitted 6-foot-5 senior guard poured in a game-high 25-points as The Patrick School won the Union County championship with a 62-54 victory over Linden at Kean University. “I didn’t see it coming,” said Chris Chavannes, The Patrick School coach who succeeded the legendary Kevin Boyle and won his second straight Union County title and the school’s 18th overall. “Usually with Dupree, you have to chastise him to shoot the basketball and to be aggressive offensively. One of the problems we had in the two losses to Linden was our guards were back on their heels. We weren’t attacking them. That’s what we wanted him to do today.” A left-handed combo guard who still must work on developing his right hand, McBrayer burst onto the scene in mid-January when he scored 19 points in a win over Roselle Catholic, the defending New Jersey Tournament of Champions winner. In this, the biggest game of his life, he helped the Celtics take a double-digit first-half lead with a mix of forays to the basket and jumpers. After Linden went ahead 53-50, McBrayer scored six points as The Patrick School closed the game on a 12-1 run. “It’s great,” McBrayer said. “I just want to thank preparation. Preparation got me here.” After Linden took its final lead at 54-53, a bucket by Seton Hall pledge Angel Delgado and McBrayer’s left-handed runner made it 57-54. “It was great,” sophomore guard Bryce Aiken, who scored 11 points, said of McBrayer. “He’s a huge part of our success, helping me in the back-court definitely takes a lot off my shoulders. My back was killing me today, he definitely helped out and picked up the load.” As far as colleges, McBrayer lists interest from a wide array of schools, including Providence, Arkansas-Little Rock, Drexel, St. Peter’s, Wagner, Norfolk State and Albany. “I know coaches like tall guards,” he said. St. Peter’s head coach John Dunne and assistant Serge Clement were at the game, and McBrayer plans to be at the school’s game Sunday against Niagara. “After the season I’m going to schedule some visits,” he said. “Wherever I fit in.” SETON HALL GETTING REBOUNDING MACHINE IN DELGADO 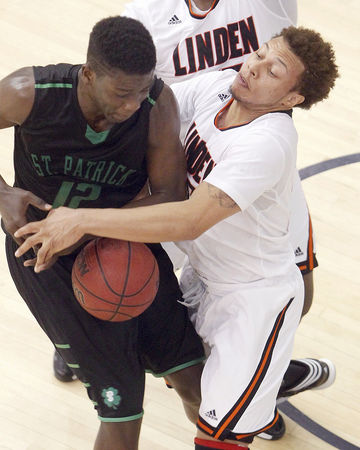 Seton Hall has a slew of guards and scorers coming in with its heralded 2014 recruiting class, so it’s especially vital that they’re also bringing in somebody who takes supreme pleasure in rebounding. Head coach Kevin Willard and assistant Oliver Antigua sat courtside to watch the 6-foot-8 Delgado, who finished with five points and 10 rebounds in The Patrick School’s win. “You can shoot too much, you can dribble too much, you can even pass too much, but no coach has ever taken a kid out of a game and said, ‘Sit next to me, you’re rebounding too much,'” longtime New York recruiting expert Tom Konchalski said of Delgado. “He’s the Colonel Sanders of Garden State hoops. He may only do only one thing but he does it right.” Yes, but Delgado does a couple of things well. He also defends. He helped limit Cincinnati-bound big man Quadri Moore to 14 points, but only three down the stretch. Linden went scoreless during the final 3:20 of the game. “The plan coming into here was to limit Moore’s touches,” Aiken said “I think Delgado did a great job of that down the stretch.” Said Delgado: “For me I’m trying to do my best in the post and rebound.” He joins McDonald’s All-American Isaiah Whitehead of Lincoln, Lincoln wing Desi Rodriguez, Bishop Loughlin guard Khadeen Carrington and Newark East Side forward Ismael Sanogo, whose team won the Essex County championship, in Seton Hall’s class. “If we play hard we gonna be a really good team,” Delgado said. “I think we’re gonna be a really good team.” Photos: The Star-Ledger

On the Bubble and Facing Multiple Tragedies, St. John's Gets Much-Needed Win vs. DePaul