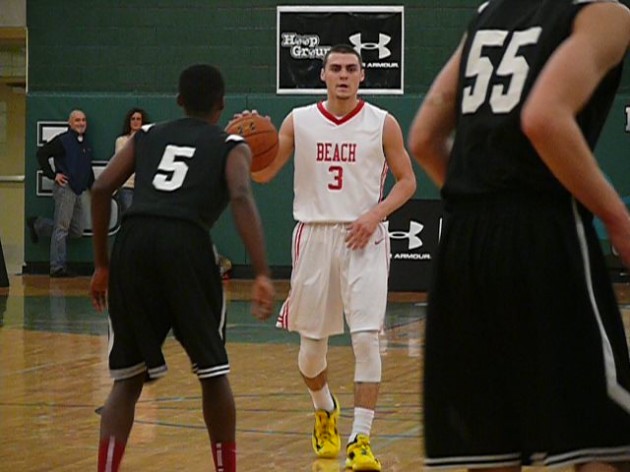 By JOHN PAVIA Special to ZAGSBLOG POINT PLEASANT BEACH, N.J. — Since Point Beach point guard Matt Farrell decommitted from Boston College, his stellar play this season has piqued the interest of several high-major schools and he seems to be attracting new schools with each passing game. In Thursday’s 62-42 win over Southern Regional, Farrell scored 17 points and dished out several assists to his teammates for easy buckets. His lightning-quick first-step and ability to attack the basket jump out at you when you watch his game, but what stood out Thursday was his decision-making and suffocating defense. He accounted for several steals in the halfcourt that led to fast-break buckets and helped blow the game open in the fourth quarter. After the game, both Farrell and his coach, Nick Catania, stated that the game wasn’t one of their best, but towards the end they began playing very unselfish basketball and broke the game open like they usually do much earlier. Bob Farrell, Matt’s father, spoke to SNY.tv to give us an update on Matt’s recruitment. “Fordham has been really interested and Matt had a visit with them not too long ago [on Monday],” Farrell said. “St. Joseph’s is very interested. Iona, Seton Hall talked to me recently to say they would begin heavily recruiting Matt. Creighton is still in it. Rutgers called me the other day and said they love Matt’s game.” Fordham head coach Tom Pecora and St. Joseph’s assistant coach Dave Duda were in attendance Thursday to watch Farrell play and might be in attendance on Sunday to watch Farrell and Point Beach take on Jackson Memorial in the quarterfinals of the Shore Conference tournament. Also, Bob mentioned that the most recent school to contact him about Matt was Notre Dame. They also hoped to take in Sunday’s game or one of his games beyond then if Sunday could not work. There are no visits officially scheduled yet, but Bob told SNY.tv that they would like to take a visit to Seton Hall and St. Joseph’s, as well as the other interested schools, in the near future. He mentioned the difficulty in scheduling visits while conference and state playoffs are currently taking place, but this is an important decision that will affect not just Farrell’s basketball future, but also his education future. “I’ve always told Matt, “What’s the motto at our school? Four for 40,'” Bob said. “Four years of education will determine the next forty years of your life. I want him to go somewhere he’s comfortable, can get a good education and just have fun. I want him to come to me and say, ‘Dad, this is it. This is the school for me.'” Farrell will lead his 22-1 Point Pleasant Beach team against Jackson Memorial on Sunday at Long Branch High School in the quarterfinals of the Shore Conference Tournament. Wherever he lands, Catania believes Farrell will contribute. “Matt is one of the top point guards in the tri-state area,” Catania said. “He combines a high skillset with a great feel for the game. Matt is going to have an impact on whatever program he chooses because he makes the players around him better and he is a winner.” Follow John on Twitter