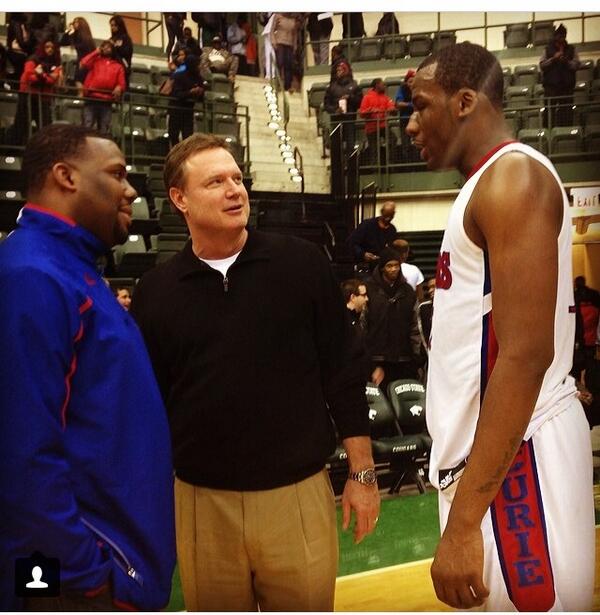 By JEREMY WOO Special to ZAGSBLOG CHICAGO — There was Bill Self. There was John Groce.  And there was Cliff Alexander. Understandably, things could have been a bit awkward for the big man during Sunday’s Public League quarterfinals at Chicago State University. Alexander’s future and might-have-been head coaches sat courtside, just a few seats apart as his Curie squad fought to a 71-64 win over fellow public league power Simeon. Self watched his 6-foot-9 soon-to-be star drop 16 points, grab 11 rebounds and block six shots. Groce checked on 2015 Illini verbal commit D.J. Williams of Simeon. After Alexander’s notorious hat-fake on signing day, the big man was cordial with Groce and staff and caught up with an extremely happy-looking Self. Self’s excitement made plenty of sense—not only will Alexander be a Jayhawk in a matter of months, but he’s been helping Kansas in its pursuit of elite unsigned guard JaQuan Lyle of Huntington Prep. Alexander and Lyle are close, and their discussions about playing together have been well-documented. As a Jayhawk, he’s now actively working to bring his buddy with him to Lawrence next season.
‘“I talked to him a couple of days ago,” Alexander told SNY.tv. “He’s still making up his mind. We need a 6-foot-4 point guard. We’d love to have that.”
“Me and Cliff, we’ve been tight since about our eighth-grade year and our relationship just grew, so now he’s like a brother to me,” Lyle told SNY.tv earlier this month. “Just the opportunity to play with him would be wonderful. Cliff makes me better, I make him better.” Lyle is due to visit Kansas Feb. 24 for an official, as first reported by SNY.tv. He also plans on visiting Providence in early March, and is also considering Oregon, Oklahoma State, UConn and Memphis. When asked about another big fish still in play for Self and Kansas, Alexander was also enthusiastic. Presuming the departure of Joel Embiid to the NBA, the void in the middle for Kansas could be filled by not only Alexander, but center Myles Turner of Euless, Texas, the top uncommitted prospect in the nation. “It is what it is,” said Alexander. “I think we’d fit in. He blocks shots and does the same things I do. I think it’d be a dominant combo.” Turner and Alexander would give Kansas two big men in the conversation for the No.1 player in the country. “I think I earned it,” Alexander said when asked about the top spot currently belonging to fellow Chicagoan Jahlil Okafor of Whitney Young by consensus. “I’ve played up to this point and I think I earned it, to be the number one player in the country.” He might get a chance to stake his claim later this week. With semifinal wins on Wednesday, Curie and Whitney Young would face off on Friday night for the city championship. Alexander would get a shot at his former AAU teammate, who led Whitney Young to a quarterfinal win on the same court just a couple hours earlier. “I want that matchup right there,” said Alexander, who lost narrowly to Okafor and Whitney Young in last season’s state playoffs. Wouldn’t we all. Photo: Cliff Alexander Follow Jeremy Woo on Twitter