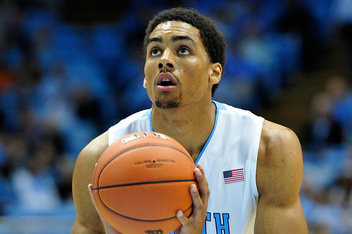 CHAPEL HILL, N.C. – With 25.6 seconds left, all James Michael McAdoo could do was watch.

And he wasn’t even aware that would be the case right away.

“I didn’t know it was my fifth foul cause I didn’t know I got my fourth foul,” McAdoo said after going for 24 points and 12 rebounds in North Carolina’s 75-71 victory over No. 25 Pittsburgh. “But that’s a long story.”

Twenty-one seconds after his fourth personal foul – a call that had head coach Roy Williams irate – McAdoo was whistled for his fifth foul on a block on Pitt’s James Artis.

“When I’m on the bench it’s really hard knowing I can’t be out there helping my teammates,” McAdoo said.

Fortunately, the Tar Heels didn’t need him any longer.

Much like his team – which has won six straight games – McAdoo has been hitting his stride of late. But like his team, Williams knows his junior forward hasn’t reached his peak.

“Again, it’s a work in progress,” Williams said of McAdoo. “He had one ball on the break when he’s flying down the right side that had no prayer and I was praying like crazy…But he is getting so much more in control. To me the best thing is not only 24 points but 12 rebounds.”

It led to extra offensive possessions for North Carolina. And his step up in play has sparked the rest of the team.

“Just kind of leading the charge,” J.P. Tokoto said of McAdoo. “We look to him to score and create offense. Today he did and he’s done it other games, so it’s not a surprise to us.”

Neither is the recent spurt.

North Carolina always knew they could play with the top teams in the country. Despite losing seven games this year, the Tar Heels are now 4-1 against teams ranked in the Top 25, including a win over then-No. 1 Michigan State, then-No. 3 Louisville and then-No. 11 Kentucky.

And after starting 1-4 in conference, the Tar Heels are now 7-4 in the ACC. In turn, they’ve gone from a team that was once alone in 15th place to alone in fourth place.

“It’s really just attributed to everyone on the roster, including the coaches really just not folding,” McAdoo said. “Coach emphasized throughout that rough stretch that he’s coached basketball for X amount of years and he’s never had a team cave in and we weren’t going to be that team…We want to keep continuing to get better.”

It’s something McAdoo has done, as well as the team as a whole.

And so, the Tar Heels seem to be hitting their groove. And they couldn’t ask for much better timing with the ACC and NCAA Tournament a month away.

“I would like to say so,” McAdoo said when asked if UNC was hitting its stride at the right time. “You always want to hit your stride towards the end of the season. Hopefully we’ll continue to play as well as we are now and even better. Nothing we did in the beginning of the year is something we want to hang our hat on. We want our best games to come at the end of the year.”