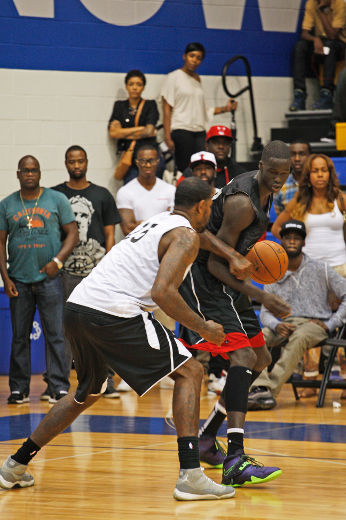 Thon Maker, the consensus No. 1 prospect in the Class of 2016, will meet with Australian National Team coach Andrej Lemanis next month about a potential future role with the team. The meeting will take place March 9-11 in Virginia, where the 7-foot, 208-pound Maker attends the Carlisle (Va.) School, Ed Smith, Maker’s legal guardian, told SNY.tv. “The Olympic coach is going to come in March and lay out a plan for Thon so that’s exciting,” Smith, who lived in Australia for 22 years and met Maker there, told SNY.tv “For us, we are looking at his process but what benefits Thon the best. So we’re going to listen to what [Lemanis] says and what his plan [is] for how he’s going to use Thon and so forth and then we move forward from there and see what the timeline is.” It’s possible Maker — an Australian citizen born in South Sudan in 1997 — could be in the mix for the Boomers in the 2016 Rio or 2020 Tokyo Olympics. Maker is being recruited at the highest levels by Kentucky, Duke, Kansas, Georgetown, Virginia and LSU, among others, Smith said. “We have to see how Thon progresses,” Smith said in reference to his future with the Boomers. “Physically, he has to gain another 20 or 30 more pounds to compete at that level. And we have to shorten his game a little bit. Right now he’s at that stage where he’s doing a lot. As you get older and older, the game shortens.” Australia has participated in the most Olympic men’s basketball tournaments (13) without winning a medal, but there is hope for the future. Just as Canada has a slew of talented youth led by NBA players Andrew  Nicholson, Tristan Thompson, Cory Joseph and Anthony Bennett and future draft picks Andrew Wiggins, Tyler Ennis, Nik Stauskas and Melvin Ejim, Australia also has a bright future. There are currently four Australians in the NBA — former No. 1 pick Andrew Bogut, Patty Mills, Aron Baynes and Matthew Dellavedova. Moreover, Australian point guard Dante Exum is projected as a top-5 pick in this year’s NBA Draft, and 2015 LSU commit Ben Simmons of Montverde (FL) Academy is considered a future pro, too. “I mean, that’s big-time, that’s big-time” Smith said of Maker potentially playing with the Boomers. “If it’s in their plans and they see him as a prospect that can help him down the line then that will be exciting. “But we have to go step by step. If he’s not ready then you’d rather have him ready at 2020 than at 2016.” Photo: Toronto Sun