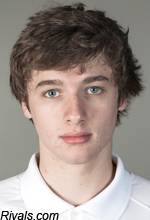 By JACK LeGWIN & ADAM ZAGORIA Austin Grandstaff has pulled his commitment from Oklahoma State and reopened his recruitment. The 6-foot-4 shooting guard from Rockwall (TX) is the No.36 ranked player in the Class of 2015 by 247 Sports. “We’re looking at anybody and everybody,” Wes Grandstaff, the director of Team Texas and Austin’s father, told SNY.tv Friday morning. “Since [Thursday] night we’ve talked to Ohio State, we’ve talked to Iowa State, we’ve talked to Oklahoma,” Wes said. “SMU called this morning. Texas A&M, we’ve heard from them.” Wes said they may attend the Cincinnati-SMU game Saturday night. “We might go to the SMU game [Saturday] night,” he said. Wes said Michigan and Florida are teams that intrigue Austin, but Wes himself had not heard directly from them yet. “He’s really been watching Florida a lot and Michigan a lot,” he said. Wes said Austin decommitted “to keep our options open.” “We just want to sit back and see how things go,” he added. “We probably committed too early. Looking back, we got excited about Oklahoma State, both of us did. And we’re still excited about Oklahoma State. They have a lot to offer, their facilities. Coach [Travis] Ford is a great coach. We just want to sit back and evaluate and I don’t want to look back at this and have some missed opportunities and not have done our homework and looked at a lot of schools and let him be recruited. “I want him to be recruited and have his options open.” Wes added that Austin is “leading the state of Texas in scoring” and has gone for 36 and 30 in his last two games “and they were games we had to win.” Oklahoma State, meantime, remains involved with Huntington (W.V.) Prep guard JaQuan Lyle and Euless (TX) Trinity big man Myles Turner.  The decommitment was first reported by Rivals.com’s Eric Bossi.