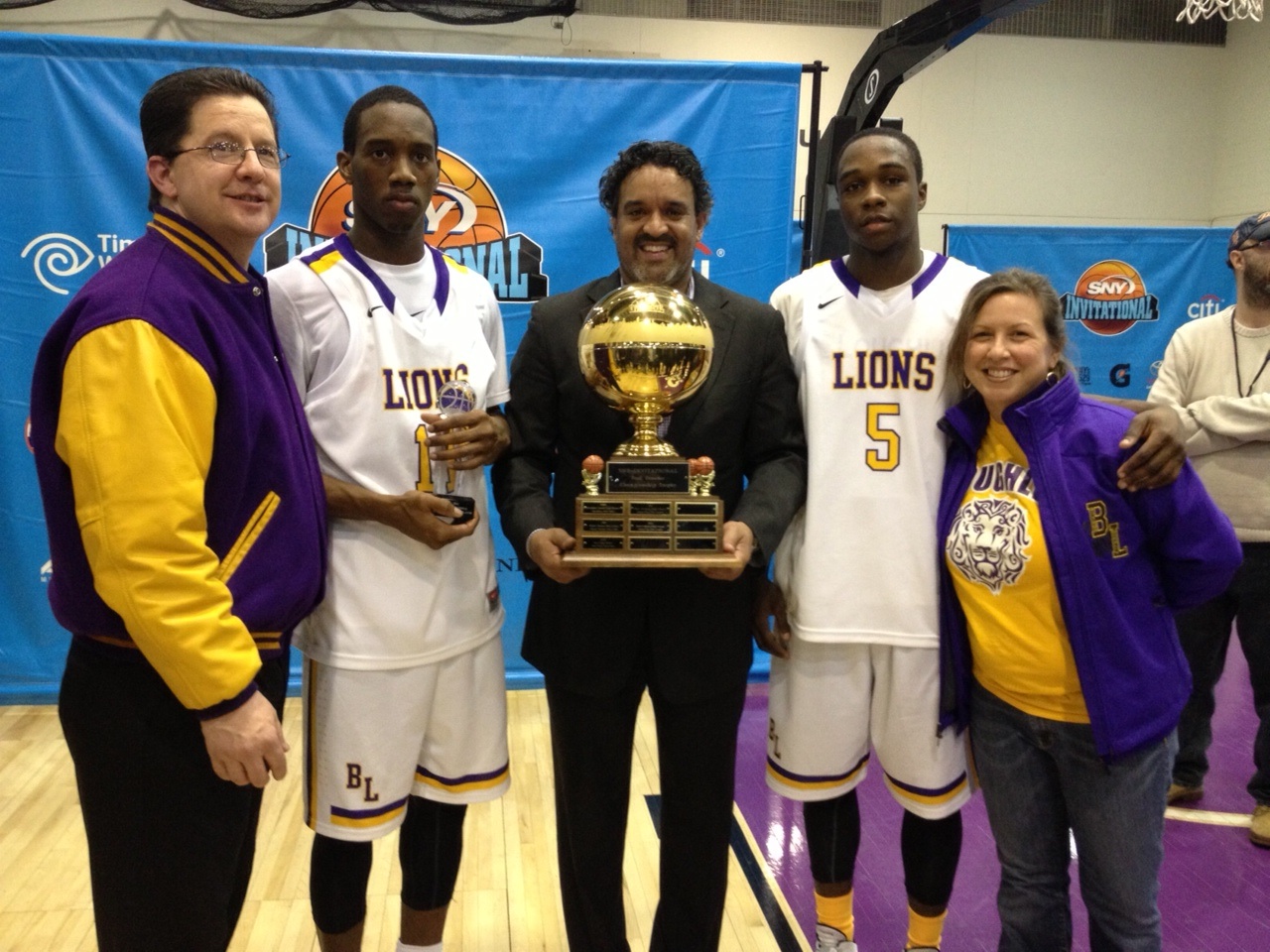 NEW YORK — Before taking on Bishop Loughlin for the SNY Invitational championship, Bob Hurley said his team needed to contain Seton Hall-bound guard Khadeen Carrington and Rutgers-bound guard Mike Williams, who had combined for 52 points in the semifinals. Otherwise, the Hall of Fame coach said, “We’re gonna be in a pile of hurt.” When all was said and done, Carrington and Williams did deliver a “pile of hurt” on two-time defending champion St. Anthony, combining for 37 points and 16 rebounds as the Brooklyn school demolished Hurley’s club, 69-55, to win the SNY Invitational at CCNY in their first year in the event. Loughlin (14-3) and head coach Ed Gonzalez became the first New York City program since Rice in 2010 to win the SNY Invitational after the Jersey City program captured titles in 2011 and 2013. http://web.sny.tv/media/video.jsp?content_id=31322609 The 6-foot-3 Carrington was named MVP after finishing with 20 points and 10 rebounds by repeatedly attacking the basket, including a jaw-dropping, acrobatic three-point play just before Loughlin seized a 35-25 halftime lead. “They were so superior at most of the perimeter positions,” Hurley told SNY.tv. “[Carrington] has an explosive, sophisticated driving game. He’s a very polished offensive player.” Williams added 17 points while shooting 3-for-6 from beyond the arc. In two days at the tournament, the 6-3 Rutgers signee went 9-for-12 from deep, a skill that Rutgers coach Eddie Jordan will need to utilize as the Scarlet Knights move into the Big Ten next season. Jayvian DeLaCruz added 15 points for Loughlin, which went on a 21-2 run and outscored St. Anthony, 26-16, in the fourth period to put the game away. St. Anthony junior wing Markis McDuffie was named the Sportsmanship winner after scoring 12 of his team-best 14 points in the second half. The athletic 6-7 face-up man holds offers from Seton Hall, Fordham, Buffalo, Quinnipiac  and St. Peters, with interest from Florida, Miami, Wake Forest, St.Louis, Dayton, Temple and Oregon State. Tarin Smith, an uncommitted senior point guard, added 13 points for the Friars and BU-bound guard Cheddi Mosely added 11 points. St. Anthony’s top two players, McDuffie and Smith, combined to shoot 12-for-32. In the end, St. Anthony (10-3), which now has three losses on the season, simply had no answer for Carrington or Williams, the two best players on the court. Carrington is part of a loaded five-man class heading to Seton Hall that includes the Lincoln duo of Isaiah Whitehead and Desi Rodriguez, rebounding machine Angel Delgado of The Patrick School and wing Ismael Sanogo of Newark East Side, the No. 1-ranked team in New Jersey. “Those are great guys to play with,” Carrington told SNY.tv. “Desi and Isaiah, I knew since I was young. Angel, I met him over the summer and we just clicked. It’s going to be great playing with them. We support each other, so it just makes it easier on the court.” Carrington and Whitehead will join current guards Sterling Gibbs and Jaren Sina to give coach Kevin Willard a deep mix of backcourt options. “I think we’re going to play three guards next year,” Carrington said. “I think it’s a plus because all of us can handle the ball. Sterling [is] going to have a little help on the ball-handling side so that makes it easier for Sterling and we get the bigs the ball, hit open jump shots. “We just gonna go there and play and play our hardest and see what happens after that.” Hurley came away impressed with Carrington and believes Seton Hall is turning the tide thanks to New York and New Jersey-based assistants. “[Carrington’s] ability to score and his ability to get inside your defense,” he said. “They got Gibbs for two more years, but [Carrington] is going to be a factor.” Said Gonzalez: “I think the sky’s the limit for those guys. They are well coached in Coach Willard. They got some good personnel coming. I think it’s just a matter of time before we start making some noise out there in Jersey.”

Hardaway Jr. Feeling Good About His Game & Michigan's, Too