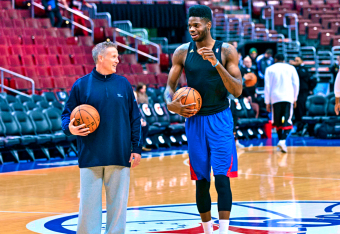 NEW YORK — The Philadelphia 76ers are still debating how to handle Nerlens Noel’s return from ACL surgery and it remains possible the former Kentucky star could sit out this entire season. “I’m really not sure,” Sixers coach Brett Brown said Wednesday night at Madison Square Garden before his team met the Knicks. “I mean, anything’s possible. I mean at this stage, we’re moving forward and he’s doing a good job.” The 6-foot-11 Noel was on the Garden court before the game shooting some one-handed jumpers, but has yet to be cleared for contact. He tore his ACL during his freshman season at Kentucky last February and fell to No. 6 in the 2013 NBA Draft. The Sixers (13-28) are rebuilding and have Noel, former Syracuse point guard Michael Carter-Williams and two 2014 first-round picks with which to build going forward. The question is: Why even bring Noel back when the Sixers are widely regarded to be rebuilding/tanking in anticipation of the upcoming Draft? “It is very  up in the air,” Brown said of Noel’s status. “It’s the thing that we tell all the different cities that we visit, is that there are so many layers to him being allowed to play. We continue to put in work. He’s fantastic to work with. He’s got a real infectious personality and a desire to improve and we’ve used this opportunity to help break down his shot. But in regards to health and the timeline on playing it’s just guesswork right now. “He is ticking all the boxes at the rate tha we had hoped but what that means  in relation to getting on a court is still very vague.” Photo: Bleacher Report